You’ve probably heard about it – the well-known Writing Cave – but have you ever been inside one? My writing process requires an extensive stretch in it toward the end of each story. I’ve spent a considerable amount of time in mine these past few months. Want a peek inside? Right this way for a tour of the Writing Cave.

Step around those piles of paper. No, no – look out! If you knock over that pile you’ll disrupt the elaborate, delicate system of editing phases and timeline checking.

Yes, there is a chair under those clothes. Somewhere. The clothes are clean. Honest. Fresh from the dryer, in fact, but why is it that clothes never seem as clean when lying on a chair?

And for some reason the clothes that come off the chair create the oddest sartorial combinations. A fact that is not noticed until removing them in a brain-dead stupor at the end of the day … or, technically, early the next day. 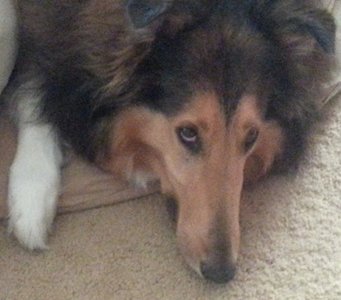 The theme of strange combinations extends to that wasteland otherwise known as the kitchen. The only essentials are chocolate and Tab. Otherwise, cheese and crackers equals a two-course meal. An apple is haute cuisine. Two-day-old green chai tea reheated qualifies as health food. Microwave popcorn for dinner is good. So good it works five days in a row. So good that it works for lunch, too.

Sleep? Until I can figure out how to type or edit in my sleep, it’s basically a waste of time. Although dreaming and waking up thinking about the story – oh, that’s what has to happen between the party and when she decides to stay.

That scratching sound you hear? Those are my hands, because lotion on my hands would mess up the keyboard and I don’t have time to let it sink in.

My dog, Kalli, hates the cave. She eats better than I do, gets a lot more sleep, and, of course, gets to go out. But life is a tad boring with the only thing to herd being those papers that her person is so touchy about getting knocked over.

Ah, but then it’s time to come out of the cave. To put the clothes away, get some sleep, sort the papers, restock the refrigerator, give Kalli the attention she’s been lacking. That means combing her, clipping her nails, reinforcing commands …

…Until she’s looking around, asking when I’m going back in the cave.

What came from the most recent stay in the writing cave? Jack’s Heart, the next book in the Wyoming Wildflowers series. Hope you’ll think it was worth Kalli’s sad looks! 🙂