Straight from the heart: Fur babies

If you’ve ever followed me on social media or been part of Patricia’s ReadHeads, you know about my rescue collie Kalli. 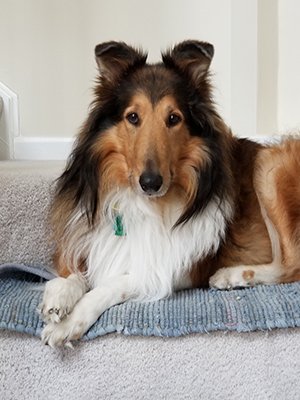 I was heartbroken when she died at the end of September 2021 at 14½ years old.

After coming through three tough leg surgeries for a broken carpus (foreleg “ankle”) with a metal support implanted, removed because of infection, then a new one put in – with each surgery requiring a 16-week confined convalescence – she had a sequence of medical issues in the last 14 months of her life. That included nearly dying from neurotoxicity from an antibiotic (read the cautions pet owners should know about here) and then being diagnosed with Cushing’s and having a seizure from drug interactions.

Of course I knew we were on the downslope. But she was such a fighter it was a shock when the vet said we’d reached the end of the possibilities for relieving Kalli’s pain. I thought we still had months.

Making that decision was clear. She had pain we couldn’t relieve. I feel strongly it is the last good thing we can do for animals who give us such love, such trust, such responsibility for their well-being.

I cried. A lot. Over things like finding an in-case bag for poop in the pocket of a jacket I wore for winter walks with her, like washing her beds (six of them!), like her nose prints on the car windows (they’re still there.)

The house was hollow.

I knew I’d adopt another dog. I thought maybe in the spring for practical reasons. Not because I’d be done grieving Kalli in the spring. I won’t be.

That was one of the lessons she taught me.

I adopted Kalli only two and a half months after my previous rescue collie died. I didn’t stop grieving him because of having her. That isn’t how it works. At least for me.

But having her did make me laugh more.

Adopting again doesn’t stop you loving and missing the departed dog. But it does start you loving the living dog. And that also helps me remember the joy with that departed dog.

Which helps explain why the practical plan to wait until spring didn’t happen. 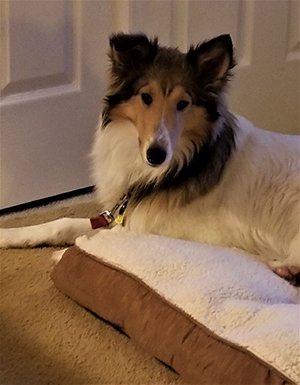 My understanding is she came into the rescue from a breeder who turned in her and some litter mates. The adoption happened quickly as an influx of rescues hit the group. But, really, adopting a furry girl is not much of a sacrifice. 😁

As far as anyone knows, she didn’t have a name until collie rescue got her. They called her Tesla (really???). My sister said they named her after Nikola, the inventor, rather than the car. I said, that’s who they named the car after. Still a lousy name for a dog. And how many people would know that, huh? And my sister said keeping the name would give me an opportunity to educate people. I said no thanks.

My previous two rescue collies were named after characters in my books and I wanted to continue that tradition. I have a character named Tess/Tessa in my Winter Olympics book The Games … and the Winter Olympics coincide with my adopting her, so I’ve renamed her Tessa/Tess, which also should be an easy transition for her if she had caught on to that temporary name.

She’s definitely catching on to Tess/a, since I’ve been “loading” her name by hand-feeding her and giving her a bit while saying her name. Also saying “good”, getting her to sit, lie down, while saying those words and hand-feeding her, having her “focus” (eye-contact to me), and “wait” (food hand closes until she backs off and waits politely.) Easy peasy with food. The tougher transition will be when I don’t have food in my hand. LOL.

House events appear to be all new to her. A flight of stairs, washing machine, dryer, icemaker, microwave beeper, and, the very worst, the garage door opener. She’s adapting quickly. She’s also barking back at dogs on TV, social media, and, of course, live.

Couple naughty things we’ll have to work on – jumping and putting her mouth on computer wires. (Yikes!) 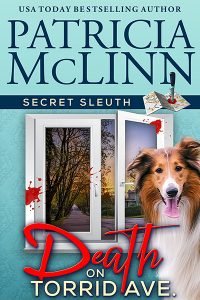 And Kalli lives on – in so many hearts, always in mine, and also through the rescue collie, Gracie, in my Secret Sleuth mystery series.