Ride Along With LivePD 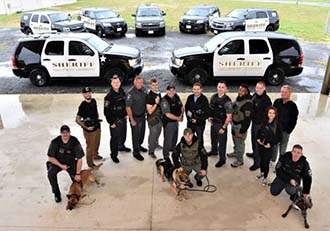 LivePD is back on A&E. Have you seen it?

Calvert County (Md.) Sheriff’s Department has been on LivePD. I figure I paved the way by doing ride-along with them mumble-mumble years ago. (Photo by WTOP radio — WTOP.com)

As research for books, I’ve done ride-alongs with numerous jurisdictions in the past twenty years, including a boat ride-along with a ranger on Lake Yellowstone and a few tours with Calvert County, Md., Sheriff’s Department, which is one of the jurisdictions that’s been on LivePD. I’m so grateful for those opportunities, for the education, and for the officers and departments being open to having an author along and answering a whole lot of questions.

— LivePD reinforces what I experienced on the ride-alongs: Every call, every interaction is potentially serious, dangerous, deadly. And must be approached that way. Things happen really, really fast.

— LivePD illustrates what I witnessed on the ride-alongs: A high percentage of people officers interact with are terrible liars. Terrible in that they have no acquaintance with the truth and terrible in that they are really, really bad at fabricating a believable story.

— LivePD reminds me of a point made by several perceptive officers on the ride-alongs: They deal with a very low percentage of regular, law-abiding citizens. Even when they do interact with regular citizens, it’s usually on a really not-good day for that citizen. (The citizen’s been robbed or is getting a ticket or had an accident…)

–LivePD reinforces how impressively officers can control situations with aplomb and strength of personality.

Driving dirty is what LivePD calls people having various illegal items in their car when a traffic infraction gets them pulled over.

What I’ve learned about driving dirty from LivePD:

If you have a valid driver’s license, you’re way ahead of the curve. They are rarities on Live PD. Suspended or no license at all seems to be the rule of thumb.

If I am ever pulled over – not super likely, since I haven’t been pulled over in more than 30 years — with Kalli in the car It’s not going to be fun. Or quiet. She will bark to high heaven. (She also won’t understand why the officer isn’t petting her. Logic is not her strong suit.)

If my car is ever searched and a baggy with residue is found, it will be either brown or orange. If it’s brown, it’s Kalli’s Pupperoni. If it’s orange, it’s cheese.

There are a whole lot of people out there operating vehicles whose baggies are not holding Pupperoni or cheese.

For the rest of us, driving defensively is self-preservation.

Were you told to always wear good underwear in case you were in an accident? Me, too. Then I was in a bad accident years ago (not my fault – I’ve got the police report to prove it) and I’m still ticked about my clothes. I was wearing a brand new winter coat that took two  years to find, a two-piece dress I loved, good underwear, and black leather shoes I loved.

When they were letting me out of the hospital three or four days later (I lost memory of a few days so it’s a little vague), they gave me back only the shoes. Their lining was so blood soaked that they were unsave-able. They wouldn’t let me even see the clothes. Not only because of the blood, but because they’d cut them off me.

So, there went that outfit.

Because of that experience, I tend to drive casual. Extreme casual.

After seeing some of the outfits of people pulled over on Live PD, I might rethink that.

I wonder what benefit law enforcement feels there is in shouting and repeating instructions over and over and over. Is it to keep suspects from trying to think out a plan? Or is it surging adrenaline?

If it were directed at me it would irk the heck out of me and make me less cooperative.  Granted, I would also know I was innocent. But even so, sometimes I find myself thinking, “Sheesh, quit yelling and give the guy/gal a chance to do what you’re saying.”

Perhaps there is a safety reason for that approach. I’d be interested to find out.

Many of the officers are patient and cool to an astonishing and admirable degree.

In low(er) urgency situations, many of the officers clearly make efforts to keep things low key. Sometimes, though, a couch potato observer can see a disconnect, where the events are clearly routine for the officer, but just as clearly not routine for the citizen.

These officers give orders very quickly, presumably because the orders and sequence are familiar to them. But I can empathize with seemingly confused civilians.

Even having heard the sobriety test instructions many times (on ride-alongs and on TV, never as the subject of the test), I have trouble making out what some officers are saying, most often because of a sing-song rhythm. It’s got to be boring for the officers to repeat it. I understand that. On the other hand, it’s (presumably) new information under very stressful circumstances for people assumed innocent.

I haven’t had an alcoholic drink since a conference more than two weeks ago … and I could not do the sobriety tests right now. Could not. I’ve tried. And in heels? Now way on earth.

My suggestion is an alternative — a snap grammar test. That I could pass.

As for the Breathalyzer, that was something else I learned on a ride-along. I couldn’t blow long enough for a legit reading. I’m a wimp.

I can just imagine how Deputy Wayne Shelton of the Cottonwood County (Wyo.) Sheriff’s Department would react to having Elizabeth Margaret “E.M.” Danniher of KWMT-TV on a ride-along. That might be an idea for another Caught Dead in Wyoming mystery series story, but for now, Elizabeth and the gang are trying to untangle mysteries from the past that spill into the present when a convicted murderer returns after 25 years in prison in Back Story, the newest in the series.

And to keep up with the series, you can now pre-order Cold Open at iBooks, Kobo, and GooglePlay. (Sorry to tell Kindle fans, but Amazon rules mean it can’t be pre-ordered there until the middle of 2018.)