In honor of my Caught Dead in Wyoming mystery series, my assistant Kay Coyte is writing for my newsletter and blog a series of consumer tips inspired by TV reporter Elizabeth Danniher.
– – – –

Last fall, I wrote about scam artists who take advantage of American patriotism either by posing as a military support charity or by using a service member’s photos to create fake Facebook profiles and wheedle cash out of lonely women who fall for men in uniform. 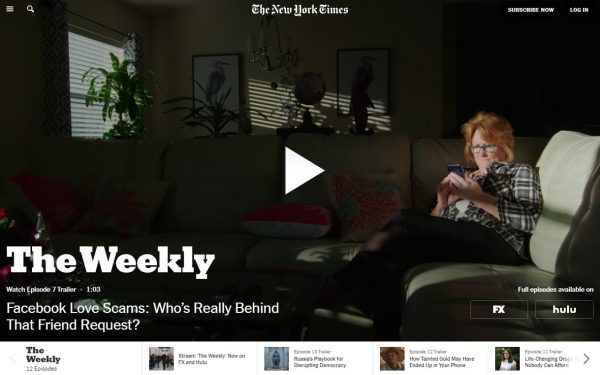 New York Times technology writer Jack Nicas in July reported on how Facebook has given scammers a worldwide platform — and hideout. Not only do con artists use the global social media site to find photos of handsome military men, they also troll widow’s support groups and other pages to find potential victims. (And, yes, they look at romance fan sites, too.)

But what angered me most is that Facebook hosts closed groups where con artists share tips, stolen identities and other information to better separate innocent people from their money.

The Times’ documentary-style series, The Weekly, followed Nicas as he tried to track down some of these scammers, traveling first to visit a Florida woman who’d been scammed out of tens of thousands of her and her husband’s life savings and then to the Nigerian internet cafe where the grifters freely congregate. The fascinating, infuriating “Connecting the World” episode, which ends with a tragic twist, aired on FX and Hulu and is still available on demand at Hulu and other cable outlets.

One of Nicas’ conclusions is that the U.S. military “seems almost as helpless as the rest of us” in stopping online impostors. That’s no surprise to Rep. Adam Kinzinger, R-Ill., who’s also a pilot in the Air National Guard. He and his staff have found and reported several accounts posing as Kinzinger on Facebook, as well as Twitter, Instagram and Google. But, he notes, many Americans don’t “have the time or resources” to be so vigilant. And the fake profiles just keep coming.

In August, he used his congressional platform to call upon Facebook CEO Mark Zuckerberg to Do Something. I’d love to see Zuckerberg explain two of Kinzinger’s questions: 1) why individual users have not been asked to take extra steps to verify their identities if advertisers have to input specific identification and location to access the site; and 2) how Facebook plans to mitigate the spread [of] fake accounts and fraudulent money transfers given that the social media platform now intends to create its own cryptocurrency.

Kinzinger had requested a response by Aug. 14. It doesn’t appear that he received one. But he’s still tilting at that windmill, responding to Facebook’s recent proposal to add a matchmaking element to its services with this Sept. 7 post, “Facebook is a great resource for connecting people and ideas, but their romance scams and identity theft issues are devastating and deeply damaging to many. Rather than compound this issue with a dating platform, Facebook should focus its attention and resources on putting a stop to the scams and fake accounts before providing impostors another way to destroy the lives of its most vulnerable users.”