Consumer Tip: Be All You Can, for Me

In honor of my Caught Dead in Wyoming mystery series, my assistant Kay Coyte is writing for my newsletter and blog a series of consumer tips inspired by TV reporter Elizabeth Danniher.
– – – –
Earlier this year we reported about scams that take advantage of U.S. military veterans. The scam in this update also targets those who want to serve their country. Thankfully, it isn’t as cold-hearted as those that bilk service members out of their hard-earned pay. But it did expose their personal information and likely resulted in a lot of annoying and unwanted sales calls.

The Federal Trade Commission investigated and filed claims against two companies, Sunkey Publishing and Fanmail.com, and their interwoven entities, charging that these operators of nine copycat U.S. military websites falsely posed as recruiters to generate sales leads for for-profit colleges. According to the FTC, the companies used websites such as Army.com, Air-Force.com, ArmyReserves.com and Marinesenlist.com to trick potential military recruits. (The Army’s official recruitment site, for example. is GoArmy.com, and Defense.gov is a good place to start if you’re just starting to consider a military career.) If you visited ArmyEnlist.com between 2011 to late 2014, you would have seen this screen: 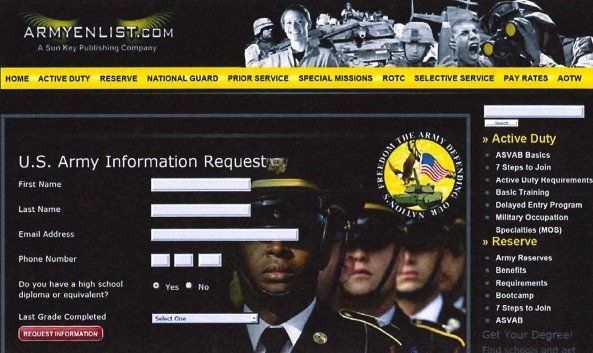 The misleading websites prompted people to submit their information to learn more about joining the armed forces and promised to use the information only for military recruitment purposes and not to share it with anyone else. Instead, the FTC charged, the companies sold the information as marketing leads for $15 to $40 per lead, making millions of dollars for themselves.

Also, those who submitted their information — which included birth date and contacts — received follow-up phone calls from telemarketers who continued the misrepresentations by posing as military staffers, touting specific schools and giving responders the false impression that the U.S. military endorsed those schools, the FTC stated. Hundreds of thousands of those calls went to numbers on the National Do Not Call Registry — also FTC violations.

In September, the companies settled with the FTC, turning over to the agency its phony websites. That partially satisfied civil penalty judgments of $11.1 million against Sunkey and $1 million against Fanmail. The companies stated “an inability to pay” the entire penalty, but if the FTC discovers they have misrepresented their financial status, the full amount of that bill would come due.

The schools were not named in the complaint, but the settlement also requires that Sunkey and Fanmail notify those that bought consumer data of the FTC’s allegations and instruct the companies to stop using the information.

Side note: Though army.com and the enlist.com websites are shut down, the domain name registrar GoDaddy.com will put you in touch with someone selling “armyjobs.com” for a cool $50,000. It’s no wonder these scams are so insidious.