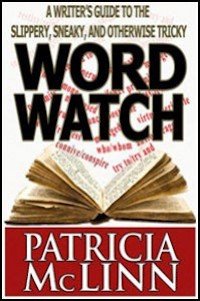 A Writer’s Guide to the Slippery, Sneaky, and Otherwise Tricky

Welcome to a word usage book with attitude. (Some say humor, too, but nearly everyone agrees on attitude.) WORD WATCH is a compilation of columns written over several years for writers’ newsletters. It stemmed from a conversation with a fellow author, who suggested — none too gently — that Word Watch quit griping about words being misused by writers and do something about it.

So, here it is: An attempt to share a lifetime of word usage scrutiny and a journalistic career of picky editing.

HOW TO USE WORD WATCH

Words that need watching are like weeds. They pop up when you least expect them. And once they take hold, they can spread like, well, weeds.

Word Watch steps into the cultured world of music for this reminder. Crescendo is the gradual build-up of intensity and volume. It is not the peak, but the process of climbing toward that peak. So, it’s: From calm words, the fight crescendoed to screams. What’s that you say about Word Watch’s musical tastes? I beg to differ; Steve Goodman does so know the difference between crescendo and a crochet hook.

As long as we’re climbing . . . Ascent refers to rising upward, making it crescendo’s cousin. Assent is agreement. Word Watch is much taken with the vagaries of our language, that one finger, sliding diagonally slightly on a keyboard can so change a word.

As the crooner crooned “What a Difference a Day Makes” so, too, does a letter make. Averse is having an active feeling of distaste. (One dictionary’s example was averse to strenuous exercise. Word Watch commends this dictionary.) Think of aversion. Adverse means opposing, acting against, antagonistic. So, Sally Lou is averse to strawberries being on the menu because she has an adverse reaction to them.

So much alike in spelling, so different in meaning. Eminent describes a position of loftiness or notability, while including protruding or prominent, whether an eminent writer (yes, Word Watch does mean you) or an eminent nose (no, Word Watch does not mean you.) Imminent deals with the dimension of time, describing something ready to take place. Especially something unpleasant or threatening. Think of the synonym impending, as in impending doom. So Ambregina’s appointment with the eminent editor she had previously accidentally spiked in the neck with her glue-on fingernails was imminent.

Continuing to wax philosophical, while some, perhaps, wish Word Watch would wane, we present this often moonstruck pair. Wax means to grow, increase, become. Wane means to dwindle, abate or ebb. Confuse the two, and you can have the moon — or passion — going the wrong direction. Think of it as a variation of the quote from The Karate Kid: Instead of “Wax on, wax off” make it “Wax on, wane off.”

“Keep it handy on your desk. Take it along for casual browsing … Read four or five entries a day to give your brain a good workout-and your spirit a good laugh.”