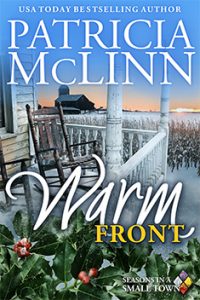 The past might be cold, but it’s familiar for Anne. And the future? That might be as gray as a midwinter Illinois sky. She’s desperately trying to hold on to the family farm owned by her late husband’s great uncle. With Uncle Everett disabled and her new to farming, loans are impossible to get.

Between the farm and the bookkeeping she does for businesses in town, she’s working to exhaustion. And she’s not good at asking for help. Never has been.

As an executive of the high-tech company bringing operations to Drago, Illinois – and driving up land prices and taxes – he represents part of the problem. But that doesn’t mean Anne can afford to turn down his rent money when Uncle Everett lines him up as a boarder. And – just what she needs — the two of them hit it off like an old-fashioned comedy team.

Quince is a warm front moving fast through her home and her life, promising spring even when all around is frozen. His quick humor and easygoing ways reach deep into the coldest part of Anne’s troubled heart.

But she realizes that behind that front, Quince, too, has icy demons.

Can Annie save not only this farm she loves, but also herself … and Quince?

Anne Hooper ignored the implications of a grumbling rattle in the engine as she bumped her seventeen-year-old compact over the cattle guard, down a drive where gravel was merely a rumor, and into the farmyard.

Just as she’d been ignoring other implications since leaving another fruitless meeting and heading home this dreary late December afternoon.

She was too weary to deal with implications.

It wasn’t at all like the muscle drained tiredness that lasted from planting through harvest. This was a blank-brained numbness.

Well, maybe not entirely blank, because her brain had spotted an unfamiliar car parked by the back porch.

She blinked at it.

It wasn’t just unfamiliar. It was downright strange.

Not only was it not a pickup, van, or modest sedan — the common modes of transportation on the farms that surrounded Drago, Illinois — but it had lightly tinted windows, protrusions like curvy fins, and a glossy finish that had clearly never been besmirched by that haunting mixture of combining dust and cow dung.

Heck, this car didn’t look as if it knew what dirt was, much less manure.

So what was it doing outside her farmhouse?

Well, her farmhouse was stretching it.

The two-story frame structure that was rapidly forgetting what paint felt like belonged to her late husband’s great-uncle, Everett Hooper.

Still, it was her home, too. The home she was working her ass off to hold onto, despite days like this.

Nope, wasn’t going to let those implications in to her head. Not until she had the energy to wrestle them to the ground.

Until then, she would put one foot in front of the other.

Which, at the moment, involved climbing three steps to the enclosed back porch that served as a mudroom, then into the kitchen beyond it.

“ ’Bout time you got home, young lady,” Everett groused the moment she walked in.

She wouldn’t have pursued the topic, but he also didn’t give her a chance. “Got someone I want you to meet. This is Peter Quincy. Quince, this is Anne, the one I’ve been telling you about.”

Before she could take in the strange man in her kitchen — even stranger than the car outside — he stepped forward and extended his hand.

She must have automatically raised hers — encased in a mitten since the car’s heater wasn’t worth spit and she reserved her warmest gloves for farm work — because there was her green knit-clad paw, wrapped in a large, bare male hand.

Her gaze dropped. Starting from clean, leather shoes planted incongruously on the faded linoleum, she panned up creased suit pants, a perfectly fitted jacket, past a crisp white shirt and richly colored tie, and up still more to a face as finely tailored as the suit.

Her stomach dropped, a sharp plunge that should have deposited it somewhere in the cellar.

“Mr. Quincy,” she responded, then found a reserve of energy to add, “I take it the car outside belongs to you?”

“You like it?” His smile turned less polished, converting to a grin. “The salesman promised it would make people think of a panther. And by extension, they’d think of me that way. Did it work?”

That salesman had been wrong.

The man didn’t gain from the car’s reflection; the man matched the car. Sleek, understated, and with the promise of power under the hood.

She pivoted away to hang her coat on its peg by the door, putting her back to the room’s other occupants.

Power under the hood?

Where on earth had that thought come from?

Wherever it had come from, it needed to go back there. Right now.

She faced the room.

“In other words, it’s built so low to the ground it’s begging for farm roads to rip out its undercarriage,” she said.

Whatever satisfaction she might have gained from being acknowledged right — and, actually, she felt a little like someone who’d pricked a kid’s balloon — evaporated when she stepped into the room far enough to make eye contact with Everett around Peter Quincy’s broad shoulders.

She shook her head.

No, this banker hadn’t agreed to the loan they needed, either.

No, she didn’t know what she was going to do next … except to keep putting one foot in front of the other. And refuse to contemplate that the next step might be over a cliff.

“Then it’s a good thing I got Quince to come on out here,” Everett said with a nod.

Peter Quincy looked from Everett to her and back, clearly knowing he’d missed something.

Belatedly, a possibility hit her.

Oh, God, what if this man was a buyer?

That would explain her stomach-dropping reaction — instinctive fear. Fear that the world had turned upside down in the past few hours and Everett Hooper had decided to sell this farm after all.

No, wait, her sluggish brain protested. That didn’t make sense.

First, Everett would never sell. Second, this man didn’t look like any buyer she’d ever seen.

“Yup,” Everett continued in a self-congratulatory tone. “You don’t think I have good ideas, Anne, but this was one. Sure was.”

And then she got it.

As if she hadn’t told him six dozen times—

“Everett.” She forced her words to crisp certainty. “You can’t be serious. What possible use could he be to me?”

She ignored the stranger’s combined protest and half laugh, focusing on her great uncle-in-law, who sputtered in a good imitation of innocence.

“This has got to stop, Everett. I am fed up, and this one has got to be the most desperate, bottom-of-the-barrel—”

Unlike the others, this stranger — this Peter Quincy — wasn’t going to be ignored. So she’d deal with him first, then set things straight with Everett once and for all.

And then she’d collapse.

She turned to look him up and down, pausing on his hands. Large and apparently capable, but if they’d experienced manual labor any time lately, she was a super model.

She pronounced judgment. “You’re no farmer.”

“That’s what I meant — you’re not fit for farming. You might be fine for other things.”

She looked up sharply. His eyes were alight with laughter.

It caught at something in her. Something buried deep. Something she didn’t recognize. Or didn’t want to.

“Then you should have better sense than to listen to his fool idea.” She jerked her head at Everett.

“It didn’t seem like a fool idea when Everett suggested it,” Peter Quincy said mildly.

She propped her hands on her hips. “Oh, really? What could a man like you do on a farm like this?”

Before she could make sense of that, Everett erupted in wheezy laughter. “You thought I brought him in to farm? Oh, Lord, preserve me from nonsensical women.”

Apparently he recognized a woman at the end of her rope — or the edge of her cliff — because, for once, he gave a succinct explanation rather than launching into a meandering account.

“I rented the man a room, Anne. You know,” he added with a deliberation meant to warn her, “the large room at the end of the hall with its own bathroom.”

Everett met her gaze. She read his concern — several concerns, actually. Starting with the fact that the large room at the end of the hall with its own bathroom had once been the room she’d shared with her husband.

But if she’d been inclined to fall apart over such things it would have happened when they’d rented the room once before.

They hadn’t needed the money then nearly as much as they did now, and she’d been newly a widow, instead of a three-year veteran of that status.

She licked her lips.

“How much? Or—” Hope blazed. Maybe if they got enough rent, combined with her income from her part-time job at Stenner Autos… “—did you leave it to me to settle the amount?”

“No,” Peter Quincy said. “We agreed to a monthly rent.”

With hope sputtering out, she repeated, “How much?”

He named an exorbitant figure. Even higher than she’d have held out for.

Not enough to get rid of the wolf entirely, but enough to keep him on the far side of the door awhile longer.

And since minutes ago it had seemed she had no time left until the wolf battered down the door and set up camp in the middle of the kitchen, any time seemed like boundless luxury.

She walked away from them at a reasonable pace and made it across the center hall. But when she hit the bottom of the stairs and her hand cupped over the familiar newel post, she picked up speed.

She pounded up the stairs, around the corner and into the hall bathroom, slamming the door behind her, and locking it before she burst into tears.

"Loved this book. Great characters and an interesting story line that adds to the other books in this series. Fun to watch the businessman Quince fall for the farm-girl Anne. Funniest scene when Anne drops the hay bale and best-dressed Quince gets coveted in hay and dust. In spite of their different backgrounds and some tough economic decisions, Quince and Anne gradually work through their way to each other. I love everything Patricia McLinn and this book is another of her great stories!" -- 5-star review

"Anne and Quince and all the people of Drago are in good hands with McLinn. I'm not a small town girl but I enjoy the friends and neighbors in this community. Good work!" -- 5-star review

Warm Front is now available in paperback at Amazon and Barnes & Noble, and may soon come to Walmart.com, where most of my print editions also are offered. The Seasons books are distributed worldwide through IngramSpark, so you also can ask your library to stock them. 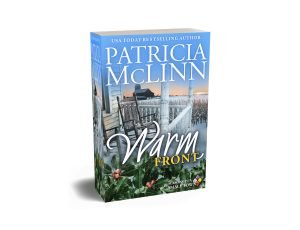