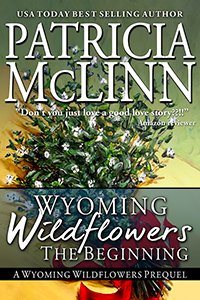 One look, a passionate love … and then they part … Forever?

Before the bestselling and award-winning Wyoming Wildflowers series, there was another love story, one that laid the foundation for all those that came after.

Ed Currick’s and Donna Roberts’ worlds couldn’t have been any more different – a rancher from Wyoming and an up-and-coming Broadway musical actress on a national tour. What could have been a momentary encounter sparks desire . . . and more. But can there be anything but heartbreak ahead when they have only days before their dreams pull them apart?

“C’mon, c’mon, hurry up! Nobody cares our bus broke down. Just want a good time at curtains up!”

“I swear, if he says the show must go on, I’ll clobber him.”

Donna Roberts laughed at her roommate’s grumble. Lydia let the company’s chief nagger get under her skin at the best of times. For Lydia, like most in their national touring production of “Sweet Charity,” those best times came only when performing.

Now Lydia groaned. It also got under her skin that Donna was not among that most. “Don’t tell me you can still laugh.”

The two-and-a-half days since closing in Omaha had been tough. They’d also been a breath of fresh air and real life to Donna.

Not that being in a national touring company wasn’t rewarding. The weeks of rehearsals in New York had been amazing. Learning songs and choreography had left her walking on air — metaphorically. Literally, her feet had ached like crazy. So, months on the road wore off the gloss. That was only natural.

“C’mon, c’mon,” Brad shouted again. “Get your stuff to your rooms, get what you need, and back here in twenty.”

“We would if we could,” Lydia muttered.

Crew that had been on the bus should have been at the theater hours ago to prep for curtain. They’d slung bags into the lobby pell-mell sending arriving’s routine confusion into chaos.

Donna slid off her coat to drape it on the lobby’s old-fashioned banister. No way was she risking her prize to the protruding corners and edges of the luggage pile. She stepped over a bag, slid her foot into a crack, and stretched toward a slice of blue that might be …

“Sound-check top of the hour, everybody but Charity–”

“Sure, Miss TV Star gets a pass,” Lydia hissed to Donna.

Donna shifted her weight to her front leg. She elbowed aside a knobby canvas bag with something protruding, and … Yes, it was her bag. If she could budge that duffel, which had to outweigh her, and the suitcase on top of it —

She stopped, frozen by the sensation of a spotlight trained on her, when she was neither on stage nor a star. Still, from her high school and college days, she wasn’t unfamiliar with the experience. This brought similar warmth across her chest and throat, while her fingers and toes went cold, butterflies rioted in her stomach, and her heart swelled with a rightness. Yet this was different …

Yes, that was it. Each element was even warmer, even colder, even flightier, and carried far, far more rightness.

Slowly, she lifted her head.

A tall young man with broad shoulders stood at the edge of the company’s chaos. He wore a blue-striped shirt tucked into jeans, topped by a plain tan winter jacket, and a dark brown cowboy hat. She had never seen a cowboy hat look more at home on anyone, including John Wayne and Steve McQueen.

He wasn’t the most gorgeous man she’d ever seen. She’d been in the business for a year and a half now, and she’d seen a fair number of drop-dead gorgeous guys. Feature for feature, he didn’t match up. No way.

Attractive, absolutely. Appealing, oh, yes. And something else … Real. That was it. Real.

He looked back at her steadily, almost solemnly.

Deep in his eyes, a light burned that she couldn’t quite catch. Almost as if she glimpsed — Donna sucked in a breath.

The sound snapped her trance, and she broke the look.

What had gotten into her? He probably wasn’t even looking at her. Most likely, she’d caught the edge of somebody else’s spot. Plenty of the girls were knockouts — they sure were taller, with legs that went on and on and on, while Donna’s just went.

He was probably looking at Lydia or Raeanne or MaryBeth or Nora. She hoped not Nora.

She looked back at the young man.

He was looking at her.

Before her mumble was half out, the tall young man strode forward, removed duffel and suitcase with ease, and scooped up her bag, presenting it to her like it weighed nothing.

She stared into steady gray eyes with a spark that —

She grabbed the handles of her bag, and lugged it behind her as she retraced her path through the dwindling mass of bags. At the edge, she turned back. The young man stood where she’d left him, watching her.

“Welcome.” He smiled. And drop-dead gorgeous didn’t hold a candle to him.

“Donna! Not holding this elevator if you don’t get in now,” Lydia yelled.

“Thank you very much!” She wheeled, grabbed her coat, and ran for the elevator.

Ed Currick remained where he was, watching the closed elevator door until physiology forced him to blink.

In his life he’d been thrown by horses, bulls, and a tractor. Nothing had ever knocked the breath out of him the way she had.

Entering from the street, he’d discovered the dignified, even stuffy atmosphere of the Rockton Hotel he’d left this morning transformed to a loud, energized, and disorganized scene.

He’d looked across the lobby at the crowd causing the hubbub, and there she’d been. Laughing.

The faces around her had been varying shades of intent, harried, cranky, drawn.

She was the shortest in a cluster of young women, yet she’d held every bit of his attention. Then she’d taken off her coat, revealing curves perfectly proportioned to her height, and waded into the mountain of luggage like the adventure of a lifetime….

To that point he’d been intrigued.

Then she looked up and their gazes met …

It was like all the horses, bulls, and tractors he’d ever been on had gotten together and thrown him at once. Like he was lying flat, with not an atom of air left in his lungs, while something stronger and hotter expanded his heart until he was sure his chest wouldn’t hold it, and all the while he stared into the dazzling sun.

He jerked his head around, only then realizing he’d stayed in place staring at the closed elevator door for who knew how long.

A tiny woman, easily as old as his grandmother, stood nearby, wrapped up in obvious preparation for going outside.

“No, Ma’am.” And what he thought he saw he wasn’t about to tell a soul. Ever.

Her gaze flicked to the elevator door, then back to him. “Hmph” was all she said before exiting.

He pulled in a breath, and damned if his chest didn’t feel sore, almost like he had been thrown by a horse or a bull or a tractor.

Not that a little soreness mattered.

After every one of the throws he’d ever experienced, he’d not only gotten up off the ground, he’d eventually mastered the beast or machinery he’d been tackling. Most times after a lot of hard work and a few more rib-jolting throws, but he got there in the end.

He’d just do the same with her.

He felt his lips twist up. Well, not exactly the same. This was going to require a skill set that didn’t enter into his daily life much. Nope, horse-sense, cow-sense, and mechanical aptitude weren’t going to get him very far with her.

He hadn’t even gotten her name. And that could be a real drawback, since he intended to marry her.

The Beginning in Print 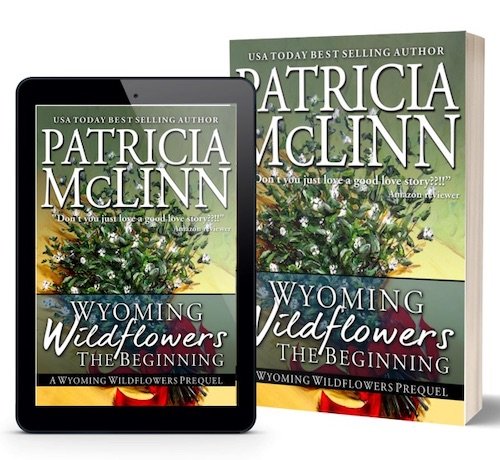 Do you prefer a book in your hand? Wyoming Wildflowers: The Beginning is also available in trade paperback from Amazon and Barnes & Noble.

You can now buy the audiobook of Wyoming Wildflowers: The Beginning direct from Patricia's eBookstore  -- at the deeply discounted price of $4.99!  It's also available at all the major online bookstores; listen to the excerpt, then click on the buy links below.