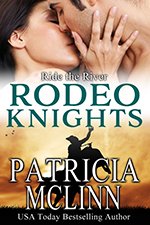 I’m delighted to be involved with this special project -– interconnected yet standalone contemporary westerns with a bit of intrigue by 10 top contemporary western romance writers. The other authors include my The Inheritance Collection partners Lisa Mondello and Margaret Daley, plus Debra Clopton, Cathy McDavid, Barbara McMahon, Stephanie Rowe, Marin Thomas and Lenora Worth. All the books released in June 2017 and are available at most major ebook stores.

In Ride the River, our heroine Reggie, longing to be an investigator, spots a pattern in far-flung bank robberies and goes undercover at three rodeos to find out more. The first day of the first rodeo, she runs into – literally – her childhood sweetheart, Chapin. And has the horrifying realization that W.C. Johnson, one of three prime suspects who fit the robbery pattern, is her Chapin — William Chapin Johnson.

To keep Reggie from blabbing his name in that first instant, Chapin grabs her and kisses her. One word and she can ruin what he’s been working for.

Chapin is trying to make a comeback on the QT. He’d been on the cusp of stardom as a bronc rider until a nasty injury leaves experts saying he’s done. As far as the rodeo world’s concerned he’s retired to his ranch. But he can’t let it go, rodeoing far from home under the name Bill Johnson.

Now he has to take Reggie into his confidence. But what on earth is she up to?

Will Chapin find out? Can Reggie trust Chapin with proof he’s not the bank robber? Can they overcome the issues that drove them apart in the first place? Who the heck is robbing banks on the rodeo circuit and can he (or she) be stopped?

Where in the world is Chapin and the rodeo?

In this special-project novella, I have the Ride the River characters going to three fictional Wyoming towns that I have used as settings in other books or series. So if you’re a longtime reader, you’ll recognize ranches and other landmarks from Sherman (the Caught Dead in Wyoming mystery series), Bardville (yes, the Bardville, Wyoming trilogy) and Park (Wyoming Wildflowers). There will be cameo appearances by characters from the other books, too. Note that one interconnection will be between Where Love Lives and its prequel Rodeo Nights (no “K”). Confused? Don’t worry. I’ll include a northern Wyoming map illustration, with both real and fictional points of interest, in Ride the River to help you sort it out.