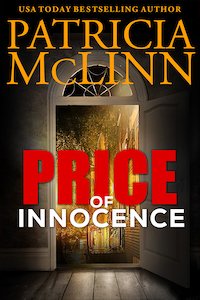 She runs a foundation dedicated to forgiveness. He’s a cop running down the guilty to make them pay. If they don’t work together, people they both love will die.

Detective Ford Belichek and his partner arrive at a murder scene in a peaceful, historic section of Fairlington, Va., only to realize the victim is the cousin of Assistant Commonwealth’s Attorney Maggie Frye.

The family tragedy that forever scarred Maggie and her cousins, Jamie, and Ally, reaches into the present, threatening to claim more lives if Belichek can’t find this murderer. And to do that he has to shut down emotions he’d thought were gone for good.

Note to my CAUGHT DEAD IN WYOMING readers: Proof of Innocence and Price of Innocence do not have nearly as much humor as the Caught Dead mysteries, though there is some. (I just can't help myself.) They're a bit grittier and darker ... though not in the deep end of grit and dark. I strongly recommend you read the preview to be sure this is something you would enjoy.

A chance to get away from everything and everyone.

She didn’t mind the rain pouring down outside. Not at all. It made it a great day to finish up, then be on her way.

Things had … piled up lately.

Not the first time in her life. She’d learned that sometimes the only way to get out from under the pile was to leave.

Step out of her life, let the curtain close behind her, take a break to do something else, then restart fresh.

The only person who knew where she was had been here last night … to their mutual satisfaction.

As far as anyone else was concerned, she wasn’t here. Nobody was. That was the whole point.

Must be something random. A kid selling candy, magazines. Miserable weather for it, but she wouldn’t mind some candy.

She opened the door.

Light, glare-white, glazed the lower two-thirds of a townhouse, reflected blindingly off its windows, and darted shadows behind an early drift of leaves pooled at the bottom of its steps. Across narrow Red Hill Street, police tape ribboned the sidewalk.

Walking between two television vans toward the light, Detective Ford Belichek stopped and looked behind him.

It wasn’t only light that changed at this border. Dark did, too.

In the distance, night softly blurred into misty midnight. A quiet place, where people relaxed into peaceful rest.

That’s where he was supposed to be, starting vacation. Though leave was more accurate. As in, he was ordered to leave.

But when he heard this call, something deeper than habit and a hell of a lot more insistent than obeying the human resources department impelled him.

He half-turned, focusing on the close-range darkness.

On porches, spectators became wraiths topped by pale, shocked ovals of faces. At street level, those behind the light had no form. Only movement betrayed them.

Murder did this, Belichek knew, dividing its universe into light and dark, truth and doubts.

Inside the glare, a slender young woman in a vibrant blue dress stepped before a man with a camera perched on the shoulder of his Washington Capitals t-shirt.

The camera carried the logo of a network-affiliated station from across the Potomac River in Washington, D.C.

Homicide among the neat brick houses and tidy lawns of Fairlington, Virginia, still had a shock value lost in too many places. Put that homicide in Fairlington’s historic Old Town and media interest ratcheted up.

A camera light came on, focused on the woman in the blue dress. Holding a microphone near her mouth, she spoke.

He couldn’t hear words, yet he knew they would recite facts without sharing the truth.

Because the truth had not yet been excavated. That was his job.

Detective Tanner Landis shouted from where he stood, fully in the light. It shaved the clear-carved lines of his face, glossed his dark hair, and starched the white shirt under his sports jacket.

Some dismissed the guy for how he looked and dressed.

Lousy policework in Belichek’s view. Reserve judgment until the facts are in.

The facts of their partnership proved Landis was a good cop.

Landis called again, impatient. “Told them you’d be listening and wouldn’t go off on vacation like a normal person. The brass will have something to say when they find out, but in the meantime, I can use you.”

“Coming.” Belichek didn’t say the word loud enough for Landis to hear above the hum of machinery and chatter of humans. Landis hadn’t waited for it anyway, moving with characteristic ease toward the house. Sure of Belichek’s response.

He caught up with his partner at the base of the steps leading to a front door that looked as old as the house and those surrounding it in Old Town Fairlington, Virginia, which — considering George Washington actually had slept here, along with a number of his contemporaries — had it pushing three centuries.

“What’ve we got?” he asked Landis.

“We? As of twenty-seven minutes ago, I’ve got primary on a body, likely homicide. Lucky me, with the department developing a leak some scumbag podcaster’s spreading to the world. What—”

“—you’ve got is a sickness that brings you here when you’re on vacation as of tomorrow. A sickness I fully intend to take advantage of. You know who they’ve proposed giving me as second in place of you? Terrington. Can you believe it? Terrington. You’d think it was a conspiracy to make me appreciate you. As for the leak, yeah, gossip so far. Doesn’t make me feel warm and fuzzy about the prospects of something about my case not slipping through.”

Landis jerked his head to the uniform coming down the townhouse’s steps toward them. Ford recognized him. Smith? Was that his name? He’d done a decent job on a domestic murder-suicide earlier in the year.

“What’ve you got for us, Schmidt?”

Oliver Zeedyk waited until the guy, surely a cop, quit looking around like a murderer was about to drop out of the sky in front of him.

He took the camera out of his jacket, smoothly to not attract attention, turned it on, and caught that cop talking to the others by the steps.

With luck— But when was he lucky?

It probably wouldn’t be usable on the show. Maybe, just maybe, he could use it to help ID the cops. Put faces with names.

Three cops — two in plainclothes, one in uniform — went up the steps and inside. There were still a lot of cops around, but low level. If he didn’t make a big deal of it, he had a chance to get atmosphere footage for the next show.

Damn. The light was crap, washing out even the garish police tape.

Didn’t matter, he reminded himself. People subscribed to the show to hear him, not for glossy video. Maybe the bit with the cops would do for a moody background to sound bites and banner quotes to make an audience salivate. A big audience.

He clamped his mouth into a straight line to keep from grinning.

Screw those jackasses who’d pushed him out. Sanctimonious prigs. Saying he hadn’t lived up to their standards.

He knew what he was after and he was going to get it.

Everything was in place.

This was exactly what he’d planned for.

He wouldn’t mind mainstream media recognizing him, but if the cops… He turned.

Not a cop. Not media, either. Had to be a hanger-on. A crime junkie. There was lots of talk about groupies drawn to true crime podcasts, especially women who got their jollies following serial killers, but plenty of guys listened to him, too.

This guy was young, skinny, pale.

“Yeah. Oz Zeedyk. I have the DMV podcast.”

That was aw-shucks modest. He was the DMV podcast.

“Right, right. Great name. Taking the DMV for the District, Maryland, Virginia, and using it for Death—”

“I go where there’s death, murder, and—”

“—violence,” he completed himself. Didn’t like this guy rushing the end of the name. Never knew who could overhear. He repeated the podcast name as many times as he could. “Especially a murder in this sort of neighborhood.”

“Right, right. That’s the big interest in this situation, huh?”

“Of course. Rich neighborhood, rich people.” Bitterness eased under a flow of warmth through Oz at knowing more than ordinary people. “This is going to be a big case. Really big.” He tapped the guy lightly on the chest. “Be sure to listen to Death, Murder, Violence. Going to be lots of surprises on DMV during this investigation.”