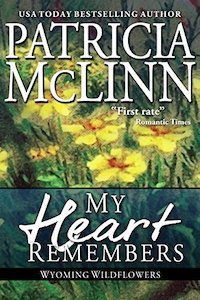 Lisa Currick was once as bright and open as the sunny Bur Marigold wildflower of her native Wyoming.

That’s how New York City Detective Shane Garrison has remembered her since she figured in his first investigation eight years ago.

But when he arrives in her hometown determined to resolve the final element of that case, he discovers the girl he’s remembered has become a very different woman.

"You cut your hair.”

There was nothing ominous about the words that came from behind Lisa Currick.

Except that with those four short words, she recognized a low, male voice she hadn’t heard in eight years.

“I’ll be with you in a minute,” she said, keeping her back to him, buying herself time. Time to put the memory that came with this voice – this man–back in storage where they belonged. Except, if eight years hadn’t been long enough, how could she hope another minute would be?

She slid the files she’d been holding into place. The corner was crumpled where she’d clutched it. She would replace it with a fresh folder later. Right now it was more important to put that sign of her agitation out of sight from the man standing just inside the door. If he was anything like he had been eight years ago he wouldn’t miss that sort of detail.

She closed the drawer, and turned to face him.

“May I help you?” She crossed to behind her desk. From this desk she efficiently ran the Knighton, Wyoming, law office of Taylor Anne Larsen. It represented all that she was now – and had not been when she had last seen Shane Garrison.

She had intended to play it out, to ask if he had an appointment with Taylor, to pretend she didn’t know who he was, to pretend she didn’t remember him. It wasn’t unreasonable. It had been eight years. A lot had changed in that time. She had changed. And they hadn’t known one another all that long back then – the tail end of one dreary New York winter, and the blossoming of one perfect New York spring. Contrary to her fantasies at the time, she also hadn’t known him well.

Yes, it was entirely plausible that she might not remember him … Then she saw his face.

The square-jawed, strong-boned face, softened only by a mobile mouth and black-lashed blue eyes. She remembered it perfectly, yet it was different from her memory. Eight years had changed him, too. If anything, it had deepened the lines of determination in his face.

“Detective Garrison.” She gripped the back of her desk chair to give her hands something to do.

One side of his mouth lifted in a half smile. She used to see that as a challenge to win a full smile from him.

“You used to call me Shane.”

“Your professional title seems more appropriate.” The needs of his profession after all had been the bedrock of their connection – the reason it started and the reason it ended.

“Does that mean you want me to call you Miss Currick–or is it Mrs. something now?”

He blocked her effort to sidestep the personal with a blunt “You’re not married?”

“You’re slipping if your detective work learned only that I had cut my hair.” The tartness of that was a mistake. Bland was safer.

His left eyebrow–the one with the small scar above it–rose. “My powers of observation haven’t slipped. I see there’s no ring on your left hand.”

She fought the urge to put her hands behind her back, winning that fight by curling her fingers into the chair’s padding. His gaze focused on the motion, and his grin shifted ever so slightly. He sat on the chair across from her desk, leaning back, crossing his jeans-clad legs, totally at his ease.

“Detective Garrison, I have work to do. If you would please–”

“You rent a house with your name alone on the lease, and your vehicle’s registered in your name–but you could still be married and using your maiden name. However, I observed that you left home alone this morning, departing in the only car that had been parked there all night. You arrived at your place of business at 8:50 a.m., left at 12:08 to walk to the Knighton Cafe, where you sat at the back booth–again alone–until 12:53, when you–”

“You’ve been following me?” The accusation was clear, but she succeeded in suppressing the outrage into unemotional chill.

He nodded, not the least abashed. “Yup. And before that, I checked your public records.”

“Then why ask if I’m married? You must have known the answer.”

He hesitated less than half a beat. “I wanted to see what you would say.”

“Why? No–” She held out a hand, standing straight, no longer gripping the chair. “No, don’t tell me. It would be a waste of your time and mine, because there is no reason that could make me care why. And there is no excuse for following me. You’ve invaded my privacy enough. Please leave.”

For half a second she thought she saw relief in his eyes–as if he didn’t know what he would have answered if she’d said, yes, she wanted to know why he was here. But that was ridiculous, because Detective Shane Garrison had always known what he wanted–and didn’t want–from Lisa Currick.

She said those words just the way she wanted. Solid. Unemotional. Determined. And now she called on the discipline of the past eight years to return his look the same way. It wasn’t easy.

Those dark-lashed, deep blue eyes had once made her girl’s heart quake like an aspen buffeted by a Wyoming wind. Her heart was no longer a girl’s, but those eyes still held power. Beyond the innate sensual message of them was a probing intelligence that knotted her stomach.

How he managed to make a formal means of address somehow intimate, she didn’t know. How easily she would have melted eight years ago at the idea of his needing her in any way, she refused to think about.

“I believe the expression that covers this situation is, Been there, done that.”

“I’m going to find the necklace, Lisa. You could make it easier–”

“It won’t hurt his chances at parole. It might even help them.”

He thought she was trying to protect Alex? A little late, wasn’t it? Alex had been her dream mentor – no, more than that, he’d been another grandfather to her. Beaming with pride at her accomplishments, instructing her, introducing her into the realm of jewels and gems that a girl from Wyoming had dreamed about before going to New York City. The day she’d learned that she’d been picked for the plum internship with the man famed for restoring only the best pieces for only the best clients, had been the proudest of her life. And the months she’d spent in the Alex White Studio had been even better than she’d dreamed. She’d learned so much, she’d been given so many opportunities, and she’d formed a genuine bond of affection and respect with a living icon of jewelry design.

And then Shane Garrison had entered her life.

He studied her. Once that concentrated regard would have driven color into her cheeks, flustered her into speech that sped ahead of her brain, and set her heartbeat thundering.

But she’d outgrown blushing, she’d learned to guard her tongue, and her heartbeat was her own business. She gave him back look for look.

Slowly, he stood then advanced until the width of the desk separated them. This close she saw the flecks of black among the blue that gave his eyes such depth. She imagined she felt the heat of his body.

“That’s entirely up to you, Detective Garrison. As long as you don’t try to involve me in your quest.”

As long as you go back where you belong, so three-quarters of a continent separates me from those memories.

While she tried to decipher that, he turned and walked out. As the door closed, she concluded that it didn’t matter what his cryptic remark meant as long as he was gone. She heard his tread on the wooden sidewalk in front of the office. Not boot heels like most men around here, but thick-soled running shoes. Running shoes’ soles were made for sneaking up on someone, unlike the straightforward here-I-come announcement of boot heels. But Detective Shane Garrison might not have counted on the wooden sidewalks most Knighton businesses had in front of them. On wooden sidewalks, even running shoes made plenty of noise to give warning. He wouldn’t take her by surprise again.

Her employer and friend, Taylor Anne Larsen, stood at the door of her inner office, looking at her quizzically.

“Do you need something, Taylor?”

Taylor shook her head. “I thought I heard voices. And you look a little … distracted. Is everything okay?”

“Someone came in the wrong door, and he took some convincing to see his mistake. As for distracted, I’m thinking about that project for my management topics class that I told you about.”

“I thought you had that almost done.”

“I decided last night that it needs another layer. I was reading at lunch about how management styles need to adapt to the new economy.”

“That doesn’t mean you’ll miss the Book Pass does it?”

If she felt a twinge as she steered the conversation toward the day planned to celebrate the library addition that Taylor’s husband Cal Ruskoff had funded, it was because Taylor’s question had reminded Lisa of how many times she’d begged off a social function with friends and family because of school work.

The twinge was not – definitely not – because she’d lied. Because she hadn’t. Shane Garrison had come in the wrong door if he thought she would help him. And he had needed convincing of that.

It wasn’t that she couldn’t trust Taylor. She could–she did. But she hadn’t told anyone in Knighton–not even her family–about what had happened after she’d left home thinking she could conquer New York, and instead had learned just how unprepared she was for anything beyond quiet, sleepy little Knighton. If it had been something really serious, something dangerous, something they could have helped with, of course she would have turned to them. They wouldn’t condemn, they wouldn’t play I-told-you-so. But it had been her mistake, and her failure. She would keep both to herself.

She wouldn’t take that risk again.

She would keep the door closed to Shane Garrison.

“It is difficult to put the book down, and even more difficult to tell the characters good-bye at the end.” — RomanceandFriends.com

“… a story of emotion and sensuality that also features strong family bonds. I read this in one sitting.” — Carol Carter, Romance Reviews Today

“… outstanding … This is the first book of Patricia McLinn’s that I’ve read but it certainly won’t be my last!” — Kathy Boswell, The Best Reviews

Get your copy from Amazon or Barnes & Noble.