Match Made in Wyoming 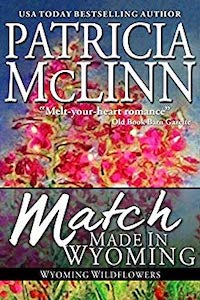 When fire ravages Wyoming land, fireweed is among the first plants to return, brightening the blighted area with the joy of its blooms. Can Taylor Anne Larsen pull off a similar miracle for the pain-ravaged heart and disbelieving soul of ranch foreman Cal Ruskoff? Armed with the same grace and grit as the wildflower fireweed, Taylor also has allies — a matchmaking friend, the Wyoming winter, high-octane mutual attraction, and a rescued puppy who slips past Cal’s defenses.

Cal might give in to passion temporarily, but from behind the wall he’s built around his past and his secrets, he’s certain Taylor is all that he can’t let himself have. And he’ll use all his weapons to keep her out.

There’s nothing more dangerous to the secrets Cal Ruskoff is holding than a redhead named Taylor Anne Larsen. He’s already shared one caught-under-the-mistletoe kiss with her. Now it’s nearing midnight on New Years Eve. Just a few more minutes and he can leave the party…

Cal stayed only because it was easier.

By staying till midnight, he wouldn’t have to listen to Matty yapping at him about being a recluse and a hermit and living like a monk. Least not as much.

Yet, as much as the owner of the Flying W Ranch got after him, she’d never pried into how he’d come to be here in Wyoming. And during the first few years, she’d left him doing his job as foreman and living his life as he wanted – alone.

But since she and Dave had gotten back together, all that had changed.

That would be good news if it ended there. But she was bound and determined that everyone else around her was going to be happy, too. He grimaced. She didn’t even care if her efforts to make someone else happy made them miserable.

The announcement acted like a switch on a slow-motion mixer. People started moving, shifting across the room, seeking out the person they meant to be beside at midnight. Matty and Dave and several of the other married couples came together in quick order.

Dates shifted near each other in varying degrees of self-consciousness. A group of unattached men started to coalesce near the kitchen door. A knot of women formed in the center of the room.

Someone said something he didn’t hear. There was laughter, and the knot of women shifted toward the fireplace, apparently craning to see something.

All except Taylor Anne Larsen, who remained in the very center of the room, momentarily isolated.

And then Brent Somebody-or-Other visiting from Salt Lake City separated from the other single men, heading straight toward Taylor.

Cal pushed off from the doorjamb.

He reached Taylor’s side as the final shout went up.

He took her shoulders between his hands and turned her to present Brent Whatever with her back. He had one second’s impression of her surprise, mixed with a glimmer of something else, before he muttered, “Happy New Year, Taylor.” The last word muffled as their lips came together.

Hers were parted. He stroked his tongue into her mouth, once, then again.

He slid one hand down her back, closing the space between their bodies. The other formed to the curve of her skull, supporting there even as the press of his mouth arched her neck.

He felt her hands clutch–one at his shoulder, the other above his elbow.

The scent was there again, all around him. A freshening breeze blending the lemon tang of freedom and the jasmine richness of gracious comfort.

And then it deepened and heated as her tongue slid against his, first touching, then seeking.

Her fingers skimmed the back of his neck, slipping under the ends of his hair, where the skin was tender and never exposed.

Someone jostled against his right side so hard that both he and Taylor had to take a step to keep from losing their balance, ending the kiss. Their arms still around each other, their bodies together from chest to thigh, his wanting her was no secret to either one of them.

That’s all she said.

A question he couldn’t answer. Not ever.

He’d never felt further from getting what he wanted in his life.

He turned around and got the hell out of there.

“…had me laughing one minute, teary-eyed the next and dreading the last page to arrive. She has a rare talent of whisking you into the lives of her characters with such clarity that you feel you are actually there … and you don’t want it to end.” — 5-star Review

“When it comes to sizzle, McLinn knows how to turn up the heat.” — Lynne Perednia, CompuServe Romance Reviews

Buy your print copy from Amazon or Barnes & Noble.