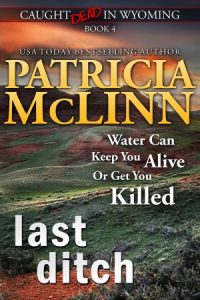 Water Can Keep You Alive …

But soon they’re on a search of a different kind – a search for the truth. It takes them deep into the intricacies of the community served by the Red Sail Ditch – the irrigation system that could make a ranch viable or worthless. They find rivalries, cooperation, antagonisms, inter-dependencies, and motives for murder.

… Or Get You Killed.

Les Haeburn’s office was crammed with staffers trying to find any halfway comfortable spot to park themselves for this episode of All-Thurston-Fine-All-Of-The-Time.

Haeburn and Fine took the most comfortable chairs, but I was glad to see someone had made sure Leona was seated—most likely Leona herself—as well as Jennifer, who was responsible for typing notes for Haeburn.

That got everyone’s attention. Mike half-straightened away from the doorframe he was resting against.

“You’ve got the names of who they’re going to appoint? Great,” Audrey said. “We can—”

“Not who’ll be appointed.” Thurston waved that petty detail away.

“The three candidates for each job?”

His confidence not even dented, Fine said, “I have a confidential source who says the search is going well and they hope to have it wrapped up in a few weeks.”

Into the silence that followed came a whisper. “What was his confidential source? A news release?”

“Great,” Haeburn said quickly, apparently to save Fine from trying to work out what that very audible whisperer might have meant. “That’s the lead, then.”

“Over two deaths?” I protested. “Even if ‘going well’ and ‘a few weeks’ weren’t what they’ve been saying for months, it doesn’t advance the story. And—”

“Does, too.” Fine might, for once, have recognized the lameness in one of his responses, because he turned red and went on quickly. “Those deaths were merely accidents. Sad, I’m sure, but no more than ranch accidents that happen around here so often they don’t warrant air time. Besides, that’s the past. Old news.” His broad gesture brushed away the past.

Uneasiness ruffled the room. Diana’s husband Gary had died in an accident on their ranch. And this jackass had just dismissed his death along with the two recent ones as trivialities.

“We have to look ahead. My story is about the future of Cottonwood County and how some are working hard to rebuild it after some tore it apart—” He accompanied that with a pointed look at me.

“Why, Thurston, are you talking about the past?”

“—by bringing down our leading civic, uh, leaders with underhanded means.”

“No one’s been convicted,” Fine said.

“Yeah. And why not would make a great story,” Mike shot back. “Why don’t you get that story? Or what about the two deaths discovered last night that—”

“Perfectly obvious what happened, as I said.”

“—have not yet been ruled—”

“Accidents,” they finished together.

“Enough of this,” Haeburn said. “Thurston has the lead.”

I swear KWMT-TV’s anchor started to stick out his tongue at me, catching it in time to, instead, lick his lips.

All things considered, I’d rather he’d stuck out his tongue.

“Les,” I said, “before we move on, I want to be sure I’m clear, here in front of everybody, so there are no understandings later—” As there had been in other situations when Fine threw a hissy fit that someone else was chasing a good story. “—that Thurston has no interest in the coverage of the two deaths last night.”

Thurston didn’t give Haeburn the chance to respond. “If it turns out to be a story—a real story, which it won’t, since they were accidents. Tragic, but accidents.” He’d clearly lost the thread of his sentence. He coughed, holding up one hand as if apologizing for the delay to throngs eagerly awaiting his next words.

“How would you know it became a real story if you don’t work it now?”

“The sheriff’s department will announce it.”

There was a low moan emanating from several directions. The whisperer gave it voice, “Waiting for a news release.”

“If it turns out to be a real story, I get it, because I get lead story,” Thurston insisted.

“But you’ve said the progress toward filling the sheriff and county attorney slots is the true lead story. And you’re not interested in two accidental deaths … oh, unless you’re not sure they were accidental.”

Everyone in the room except him knew his best move was to back off his adamant “accidents” stance.

“They were accidents,” he said.

“Okay. So, you don’t want the story, which means it’s fair game for someone else.”

“Well, if something changes…”

“How can it, when you’re certain they were accidents?”

“Enough,” Haeburn said. “Thurston has the lead. You can’t go on the air anyway, Elizabeth, not looking like that.” Such a considerate way to allude to the recent fire that in addition to consuming my rental house and everything I’d had with me in Wyoming had also put a dent in my eyebrows, eyelashes and some hair. The hair loss wasn’t very noticeable. The eyelashes and eyebrows were, especially since I hadn’t resorted to fake eyelashes or eyebrow pencil. At least not yet. “Besides, you have your own beat. Stick to it. That goes for you, too, Paycik. Audrey, find someone to report on these deaths.”

“It’ll go third up in A Block. After the price of hay. Now, let’s get on with the rest of it.”

Haeburn clearly thought he’d closed the door on Mike and me, and Thurston certainly looked satisfied with that conclusion.

But neither of them could see Audrey’s hand behind her back, giving Mike and me a thumbs-up.

"I have enjoyed this series and this book is no exception.... What a great read. Interesting with a twisting plot and gasp, no sex. It can be done." -- 5* review

"This is a very well written, totally engaging mystery with characters that are very believable. I highly recommend all four books in the series. I've learned a lot about Wyoming in the process of being thoroughly entertained." -- 5* review

"Throughout all four books, I've just been on this great ride and I'm so not ready for it to end. The writing is tight and it weaves a wonderful tapestry of modern life in the west." -- 5* review

"Danniher's thought processes in connecting the dots are amazing!" -- 5* review 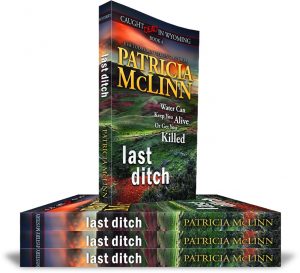 Thank you for your patience, dear readers! Last Ditch is now available on audio at your favorite retailers (see buy links in the lefthand column), plus some libraries. (If you want it at your library, please ask your librarian to order it!) This is my fourth installment in the Caught Dead in Wyoming series available for your listening pleasure. You'll note we have a new narrator, Betsy Moore. In addition to audiobook narration, Betsy is a TV/film and stage actress as well as a voice-over artist for videogames. Betsy now has caught up to all the Caught Dead titles, and we'll be sure to have her narrate the newest mystery shortly after the ebook is released.