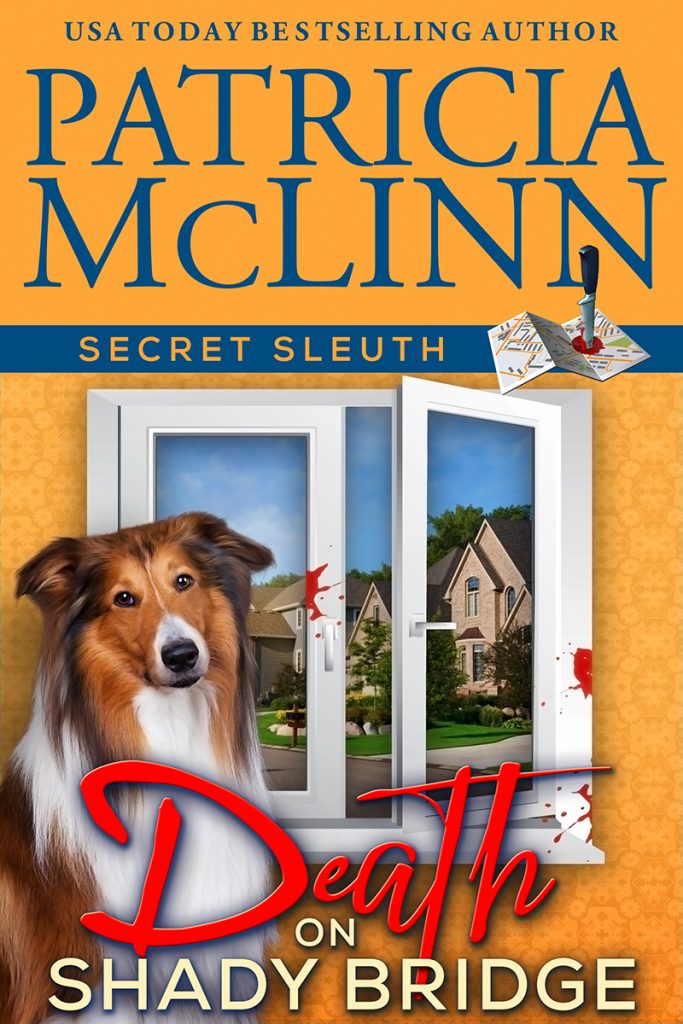 A cold case heats up

Far from the publishing world that once defined her, Sheila Mackey's plan to escape to a quiet life in small-town Kentucky keeps hitting bumps in the road ... and some of those bumps are dead bodies.

Sheila and her friend, Clara, are in for their toughest inquiry yet, when they take on investigating a death that's colder than a cold case, because few in Haines Tavern, Kentucky, think it was a murder in the first place. Suicide? Accident? Murder? They're determined to bring peace of mind to the dead woman's friends.

At the same time, Sheila is finding it harder and harder to protect her secret past, especially from Teague O'Donnell, who's shifting from a fellow dog-lover to possibly much more.

DAY ONE — MONDAY
CHAPTER ONE

Walking into the Haines Tavern, Kentucky post office that day, I  — like Alice in pre-Wonderland days  — was beginning to get very tired of waiting.

Alice had been sitting and waiting for her sister, who read as they sat on a bank.

I was waiting for the return of Clara, my buddy and cohort, who was off having fun in Chicago with her husband, Ned.

Unlike Alice, I had my own book to keep me occupied.

When Alice peeped into the book her sister was reading, she wondered what use was a book without pictures or conversation.

You might think my resolution was obvious— Go get a different book, Sheila. There, problem solved.

Alas, I was writing my book.

That made me the responsible party for all word pictures and conversations it lacked.

Which was why I was in the Haines Tavern, Kentucky, post office.

This trip was part of a campaign to find all sorts of other chores to keep me busy while I waited for Clara to come back or a white rabbit to lead me into Wonderland  — having learned absolutely nothing from the unpleasant and downright odd experiences of Alice.

I didn’t care. I needed something to distract me from facing the foot-dragging word pictures and conversations in the romance novel I was trying to write.

The compact post office was one of the oldest buildings in Haines Tavern and one of my favorites.

When I first saw it, I was taken by the red brick balance of its tidy façade.

Now, I also appreciated the warmth of its equally compact and tidy proprietor, Ruby Zweydorf.

Come to think of it, Ruby rather resembled a white rabbit, with her shock of white hair and eyes pinkened from rubbing them, presumably from post office dust. Though she did not wear a waistcoat, so had no waistcoat pocket from which to take a watch.

Her husband, Ike, smiled. His gentle, rather unfocused expression was for my collie dog, Gracie, not me.

I hesitated when I saw a third person present. Partly because three people put the postage stamp  — pun intended  — building about at capacity. With Gracie and me, it qualified as a crush. Partly because, while I recognized the third person as Millie, a friend Clara’s, I didn’t know how she felt about a dog in the post office.

One resident had objected to Gracie entering the building. He wasn’t around anymore  — not that his objection had anything to do with that  — but I didn’t know if it was an opinion shared by others.

Ruby made her opinion clear.

“Gracie girl! How’s my sweet girl? Sheila, you bring her right in here. What’re you standing there like the threshold’s a forcefield in one of those Star Trek shows for? You wait just a second, my Gracie girl. Just one second.”

Ruby must have stepped up on something behind the high counter, because she reached farther than she ever could have with her feet on the floor.

Still, with her tail going happily, Gracie had to jump up and stretch her neck toward the offering. Even then it was only thanks to Gracie’s long collie nose that treat-to-mouth contact occurred.

For the chicken treats Ruby gave her, Gracie would have done calculus.

“Now, go see Ike. He’s got something for you, too,” Ruby instructed. “Look at that. Do you see how smart my Gracie girl is? She knows who Ike is right off.”

I suspected what Gracie knew best was Ike had more chicken treats in his sweater pocket.

But I had no intention of saying that. Not with Ike’s expression of delight. A car accident had left him with brain damage and if thinking Gracie knew his name could bring a smile like that to his face, I was all for it.

Millie didn’t look as impressed. If I recalled correctly from Clara, she had a dog. I didn’t know  — or remember  — the kind, because she didn’t live in my neighborhood to see them out while Gracie and I took walks. Nor did Millie bring the dog to the Torrid Avenue Dog Park  — at least not when we went there to meet Gracie’s best buddies, LuLu and Murphy.

First, you don’t see as many collies around as there were at one time  — as I’ve been told many times since I adopted Gracie.

Second, owners of the same breed usually announce the fact first thing if they don’t happen to have the animal along for show-and-tell. Rather like fans of the same baseball team who meet halfway around the world because one’s wearing a logoed cap.

Third, I’d heard Clara tell Millie about Gracie and Millie had not said she’d had a collie as a child. Or her grandparents had a collie. Or a beloved aunt and uncle had a collie. No matter what the connection, that collie had been the best dog ever.

Ruby was a prime example of I-had-a-collie-as-a-child category. She’d shared photos and reminiscences of their family collie, Lady.

To my surprise, Ike brought me out of my collie reverie.

I didn’t recall ever hearing him speak before. It took me a second to put together his sounds into the familiar word.

Ruby picked up the thread immediately. “That’s right, we were talking about you, Sheila."

"Oh?" I hoped the edginess I felt didn't seep into my voice.

I'd spent a decade trying to be talked about. Or, rather, having books whose covers held the name I used then being talked about.

That decade ended last year. And so had that period in my life.

At the start of that decade, it had been both terrifying and exciting.

Exciting because those books bearing pieces of my family names on their covers were bestsellers and beyond. Heard of Abandon All? This half-century’s To Kill a Mockingbird, is what they called it.

Pretty heady stuff that would have been far headier if the words inside the covers had been written by me.

The person who had written the words inside the covers and the person who was the brains behind the success of Abandon All, its sequels, and our charade was my great aunt, Kit.

Did I mention terrifying?

But Ruby and Millie wouldn’t be talking about the name of the author of Abandon All. Though the name Sheila Mackey might be getting better known than I liked, despite efforts to have Clara Woodruff, my companion in recent investigatory exploits, get the credit and the attention.

All that flashed through my mind as I emitted that "Oh?"

I sure hoped none of it showed on my face. Or sounded in my voice.

“Yes, the very second before you and Gracie came in, Millie and I were talking about you and I was telling her you’re just what she needs.”

I couldn’t imagine what need of Millie’s I could fulfill.

It wasn’t like I had a skill people clamored for.

I am trying to write that word-pictures and conversations book I mentioned. In fact, trying two novels, because I got stuck on the first one, started a second, and am now stuck on it.

So, I am failing to write two novels. Yay, me.

But the only person who knew was Clara Woodrow, the friend who’s off in Chicago, who also owns LuLu, one of Gracie’s two best friends.

The third member of their pack is Murphy, owned by Teague O’Donnell. A former police detective turned substitute teacher to troubled teens and a carpenter/handyman. A nosy man, who’s been in my house and has parked himself in my life.

In other words, the man most likely to succeed in figuring out the secret of my former identity.

Have I mentioned we’re dating?

Ruby’s voice pulled my thoughts away from Teague.

"I was just telling her to not be shy of you and to tell you all about it. Well, you and Clara, except she's not here right now and you are, so go ahead, Millie."

For the first time since entering, I really focused on the other woman in the post office.

I knew Millie through Clara. They were long-time friends and fellow members of an established book club. According to Clara, Millie knew everyone in North Bend County and beyond. That helped us a time or two when we were trying to untangle, um, situations. Situations involving someone not dying a natural death.

But Millie and I had not had many direct dealings beyond hello.

She was probably in her mid-thirties. A medium build, wearing neat, but uninspired jeans and shirt. Her chin-length dark hair with thick side bangs, fell into place, also neat and uninspired.

She did not appear delighted to see me. Or, perhaps, her reaction was for Ruby's less than subtle nudging.

“Of course you can’t. Right there, that’s what I said, Millie. You need to get the two of them at the same time. Talk to them together, I said. They work together, so that’s how you need to approach them and then they’re sure to help. Told you not to try to get just one, now didn’t I? And here you are, spilling it all to Sheila.”

I sucked on the inside of my cheeks to prevent any laughter from escaping.

I could see annoyance pushed Millie toward pointing out she hadn’t spilled anything. Ruby had done all the spilling after that single, unexpected word from Ike.

Then I watched prudence push Millie back from annoyance. One does not want to make an enemy of the local representative of the United States Postal Service.

“While I can’t speak for Clara,” I started again, "if there's something I can help you with..." I hoped she could pick it up if she wanted or easily sidestep.

Watching her face, I was banking on the latter when Ruby jumped in.

"You can help her. You and Clara. Nobody else round here can. Or will," she added ominously.

"Well, it's true. If they were going to do what they should have done, they'd have done it long ago. Instead of doing nothing. It's about murder," Ruby dropped her voice on the last word.

"Well, it is. You know it is, even if you don’t want to say the word. Because it sure wasn't suicide."

What do you know  — Ruby was the White Rabbit, leading me into an investigating adventure potentially worthy of Wonderland.­

The latest installment in the Secret Sleuth series, Death on Shady Bridge, is available in both a trade paperback edition and an audiobook, narrated by Betsy Moore. You can get your print editions from Amazon or Barnes and Noble, and it's coming soon to other booksellers such as Walmart. The audiobook is available at most outlets, including Amazon, Audible, Nook and iTunes, 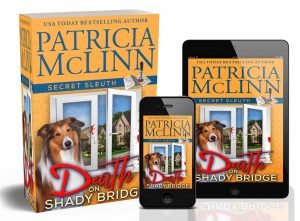