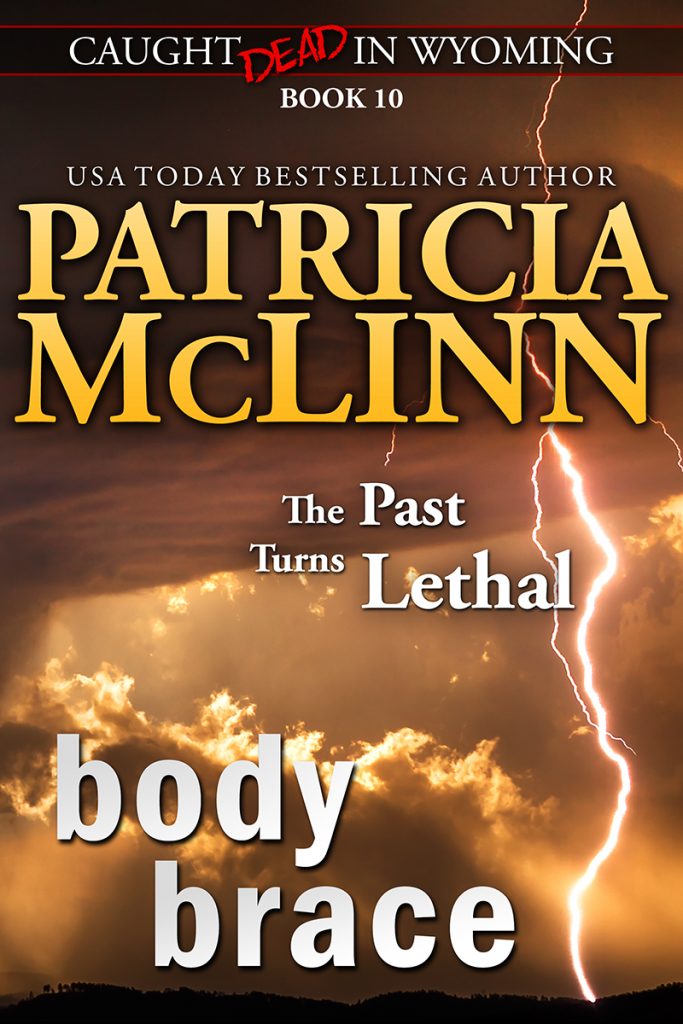 Everything can change ... except murder.

In the television production world, a body brace is used to shift the weight of the camera to the operator's shoulder. This allows for smoother shots than might be obtainable by handheld operation. Braces also reduce stress on the arms, which reduces tiredness and muscle cramps during filming. And, at the small-town Wyoming TV station KWMT, cameras are older and bulkier than those used in network news-gathering. Almost as old as some of the equipment used in a historical re-creation that draws Elizabeth “E.M.” Danniher and friends into another investigation. When there’s rumbling underfoot, a body brace helps keep what’s important in focus.
After some upheavals in Elizabeth’s professional and personal life in Wyoming, not to mention those of her closest friends, she has some recalculating to do. With her former KWMT colleague Mike now at a Chicago TV station and tech whiz Jennifer also in the city on a visit, Elizabeth’s investigation of a death discovered at the historical reenactment relies on a widening team of fellow sleuths. And rancher Tom Burrell and the usually forthcoming Mrs. Parens -- two of the town's most solid citizens -- are keeping their distance. Temporary or permanent?

Thurston Fine’s voice hit me as I walked into the newsroom of KWMT-TV.

Mornings aren’t my favorite in the best of circumstances. Morning and Thurston Fine are a deadly combination.

Then add on the fact that they stood beside the widening in the hallway that served as the break room.

In other words, they were between me and my next hit of coffee.

“Children playing at cowboys and Indians? Absolutely not. That is beneath my dignity.” Thurston’s lofty tone was worthy of someone who’d endured a slanderous affront to his journalist ethics.

For the anchor of KWMT-TV of Sherman, Wyoming, that meant it was play-acting. He has no journalistic ethics. Some — including me — would say he’s not a journalist, period. As for his dignity, he had the touchy spun-glass external kind, involving clothes, cars, and hair gel, but none of the deeper than the bones-into-the-soul kind.

Fine cut him off. “I don’t do that kind of story. I’m not going out to that God-forsaken dust bowl and report on a bunch of screaming kids.”

So how did Fine get away with dictating to Haeburn? Tempting to say Fine knew where Haeburn’s bodies were buried?

As much as I liked to figure out puzzles, did I truly care about this one? Nope. Trying to work out the Haeburn-Fine dynamic felt like the worst possible use of my time. Well below scrubbing toilets.

At that moment, the best use of my time was pouring a lot of coffee into a big mug.

In a few of the stations I’ve worked at, the News Director did the dictating. At the good ones it was a collaborative relationship among News Director, anchors, reporters, editors, camera people, and more. Those were the gems.

KWMT-TV was a lump of coal.

Over the twenty-some months since I’d arrived, I was pleased to observe it developing into a somewhat more refined lump of coal, but coal nonetheless, at this rate it would require millennia multiplied by millennia to aspire to diamond status.

Mind you, I don’t take direction from this News Director the way I did at other stations on my climb up to the No. 1 TV news market. The pinnacle from which I’d plummeted to KWMT.

If you don’t like being ruled by numbers, don’t get into TV news. Every TV news market is ranked, based on “TV households,” because a household and its residents don’t count if they don’t have a TV. From the top, those rankings go from New York, through LA and Chicago, past Washington, D.C. — which considers itself a big deal, but c’mon, it barely slips into the top ten at No. 9, so in TV land it’s barely into the world of the big boys — right down to the bottom of the triple-digits where KWMT-TV resides.

“It’s a news story.” Haeburn almost pleaded with Fine. “The angle’s the brand-new location this year.”

“That is another reason I won’t do it. There are important people who are totally against this event.”

My interest picked up. If Fine’s idea of important people were against it, I might be all for it.

“You should be telling our viewers. It’s what journalists do.”

Before Thurston responded, Haeburn, with the unsettling air of a predator sensing a nearby prey, turned to me.

“You could do the story.”

Had he picked up on that fleeting thought about my interest picking up?

Contractually, Haeburn wasn’t in a position to assign me stories willy-nilly. I had the consumer affairs beat with the “Helping Out! with Elizabeth Margaret Danniher” segment and “special projects” of my choosing. That didn’t mean he couldn’t ask, but he seldom did. The one area we seemed to agree on was minimizing our contact.

Haeburn turned on Fine. “Why not? You won’t and it’s a news story.”

That gave me an instant to recognize that Haeburn wasn’t asking me solely to put Thurston’s nose out of joint. Nor to get at me. It was to get himself out of something.

If he had picked up on that tick up in my interest, it was from somewhere deep in his self-serving lizard brain that knew how to manipulate reporters.

That landed on the negative side of whether to take the assignment. Getting Les Haeburn out of a predicament, especially by being manipulated did not appeal.

“It wouldn’t kill you,” Haeburn said to me.

I saw my response discomfited Haeburn. Not my intention, but it didn’t break my heart, either.

He hoped I’d say yes, because not having this story covered put him in some sort of pickle. At the same time, he hated that hope, because it meant relying on me. And he absolutely didn’t want to be grateful to me.

Snares in every direction.

“She won’t do it either,” Fine said to Haeburn, as if I weren’t standing right in front of him. “There’s no dead body involved, her little buddy’s no longer here, and it’s not Pulitzer material.”

My little buddy was ex-NFL player Michael Paycik, formerly KWMT-TV’s Eye on Sports, and now at a network affiliate in Chicago taking his rightful spot in the big leagues.

“Thurston, you do know there’s no category for TV news in the Pulitzers, don’t you?” I asked.

He scoffed, as if I’d made a faux pas.

Then he turned and marched into Haeburn’s office. Time to get started on that tail-chewing.

Haeburn leaned toward me and said in a low voice, “I’ll give you Diana as much as you want if you take—”

Our News Director scurried in and closed the office door.

Amazing they still hadn’t figured out that most of what was said in that office could be heard in the newsroom bullpen — especially when it was said loudly by Thurston Fine.

The thrust of his comments repeated that the story shouldn’t be covered.

The promise of having Diana Stendahl at my disposal as the assigned cameraperson might otherwise be a nudge toward doing the story.

She was the best shooter at KWMT-TV and my favorite co-worker — hands down since Michael Paycik left Sherman for the heady climes of the Number Three market in the country. Diana also was my good friend.

But Haeburn so rarely involved himself in daily decisions that assignment editors — occasionally bullied by Thurston — determined most reporter-shooter pairings. For him to meddle now could turn the assignment board into chaos.

Boy, I hoped Haeburn wasn’t starting to show interest in day-to-day operations — the downside was so steep, I wouldn’t risk it.

Especially since Diana and I generally wrangled the schedule to our liking without Haeburn’s blessing.

On the other hand, if Thurston’s idea of important people didn’t want it covered, it became more tempting.

I went into the station’s library to research.

It was dusty, windowless, cramped, and entirely devoid of allure. That meant it provided privacy not available in the newsroom bullpen of decrepit desks and chairs … and nosy eyes and ears.

Usually, the nosiness didn’t bother me much. It had increased significantly over the past year and a half, which I considered a sign of progress from apathy toward being a normal newsroom. In this case, though, until I decided about this assignment, I’d keep it to myself.

With hints supplied by Haeburn and Fine, I deduced the assignment involved coverage of a week-long camp for children, followed on Saturday by a reenactment by adults of a Cottonwood County historical event called the Miners’ Camp Fight.

Both events had been held on a specific property in the county for as far back as I spot-checked the clips — at least a couple decades.

But this year’s was in a new location.

That was Haeburn’s hot angle.

The change of venue might involve Thurston’s important people, but I wasn’t picking up anything tangible from the Sherman Independence archive. Under owner and editor Needham Bender, if there’d been anything tangible, it would have been reported.

The name Nadine Hulte, cropped up frequently as the source for unrelentingly upbeat quotes. The woman ran the Two Rivers Camp and organized the reenactment. I hadn’t encountered her before.

However, familiar names showed as being on the committee — the same names on most of the civic committees in the county. Also, the Sherman Western Frontier Life Museum supported both the reenactment and the camp. Clara Atwood was, essentially, the museum and we crossed paths before. I’d consider us amicable professional acquaintances.

After my first pass at research, it was clear this wasn’t a story that would have the Emmy Awards clamoring and the Pulitzers sure wouldn’t be moved to add a broadcast prize to honor it. But its biggest downside remained setting a precedent of doing anything Les Haeburn asked me to do.

Body Brace, With All the Options

Attention audiobook and paperback lovers! Body Brace is now out in audio and two paperback formats, the regular trade edition and a large print version. Paperbacks are for sale at Amazon and Barnes & Noble (and, eventually, Walmart), and the audiobooks are available at all the major ebook retailers, plus a few audiobook specialty sites such as Audible, Chirp and eStories. All the links are right here on this page. My go-to narrator, California-based actress Betsy Moore, again is this audiobook's reader, deftly voicing quite a cast of characters.
Thank you for your messages expressing your anticipation for my Caught Dead in Wyoming books. Of particular note was a delightful tongue-in-cheek plea of desperation from fan and artist George Angelini. Back in September he wrote:
"Dear Ms. McLinn, I am a fine art painter and I am in despair. Indeed, I am standing on the very precipice of the black well of total despondency. Why? I have listened with total delight to the escapades of E.M. Danniher in my studio while I work. I am ready for Body Brace to to my horror NO vendor has the audio version of your title. Can you shed some light on this? Seriously love the way you write and the quirkiness of your characters. Thank you for writing."
We were sure to let George know Body Brace is out there now for his listening pleasure -- and Betsy know she has a fan! 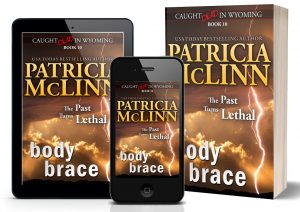