Dave Currick was everything Matty Brennan wanted for as along as she could remember. Right up until he broke her heart six years ago. Now that she’s returned to Wyoming for good, what she wants more than anything is to save her family’s ranch. Even if that means swallowing her pride and asking Dave to marry her.

Matty’s up to something — Dave knows that much. Just as he knows that Matty needs help, so of course he’ll provide it. Doing what’s best for Matty is second nature. Even when it comes to marrying her in name only. Although he can’t resist one hot-blooded kiss after the I-dos — a kiss as fiery as the flame-red Indian Paintbrush that’s always reminded him of Matty.

Maybe — just maybe — his Matty will become more to him than Almost a Bride.

Matty Brennan’s plan to save her family ranch means asking Dave Currick, the childhood sweetheart she’s sworn would never hurt her again, for one little favor….

“We’d get married, then after a while, we’d get divorced. Uncontested. Nice and clean.”

He raised one eyebrow. “Not sure I’ve ever heard of a clean divorce, much less a nice one.”

“That’s because all those other divorces were between people who were married.”

“Oh, quit with the Gary Cooper act, Currick. You know what I mean. We would be pretending to be married. I mean, we’d get married, but we wouldn’t be married. We wouldn’t –” She shot him a glowering look to be sure he got her point. “–do things married couples do. So the divorce would be no big deal.”

He rubbed his chin. God, he’d gone from Gary Cooper to Gabby Hayes. If he said Well, Goooolllleeee, she’d belt him.

“Uh-huh. Okay, so we get married–without really being married–and then we get divorced. I have that right?”

“Before we get divorced?”

She hadn’t thought that out yet. Better give herself some leeway.

He jerked up from the pole as if it had caught on fire. “Five years!”

She crossed her arms and braced her legs. “Five years isn’t a life sentence, you know. It’s not like we’d have to be together all the time. We’d only have to make it look like we were married.”

He rested back against the pole. “So it would be okay if I fooled around on the side?”

“No!” She would have taken that back if she could, especially when he got smug. “We have to keep up proper appearances. That’s part of the deal.”

“Matty, honey, be reasonable. Unless you’re rethinking your position on conjugal rights –”

“– And you don’t want me running around on you, five years is definitely out of the question.”

She gave in with ill grace. “Four years.”

She figured furiously in her head. “Twenty-two months before we start divorce proceedings.”

“Done.” He stuck out his hand. She put hers in it. He wrapped his big hand around hers, the calluses slightly abrading the tender skin across the back of her hand and the strength of his fingers pressing against hers.

Still holding her hand, he leaned back against the pole, unbalancing her enough that she had to take a step toward him to keep from falling over.

“If you love to laugh; love to cry; or love to laugh and cry at the same time,
then you’ll definitely want to read Almost a Bride.” — 5-star review 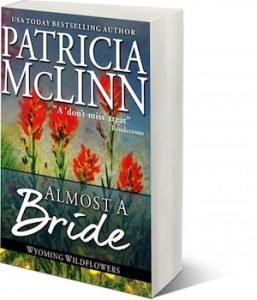 Available from Amazon and Barnes & Noble.