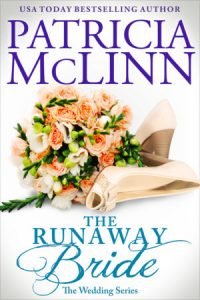 The father of the bride-to-be noted the concern and confusion on his daughter’s face. Just before her walk down the aisle, Judi Monroe overheard a conversation that indicated marrying Sterling Carroll might be a big mistake. Escaping her socialite wedding in Lake Forest, Illinois, she headed west, covering her tracks as she went. In an isolated corner of Wyoming, she swerved her car to avoid hitting a horse and rider on the road, crashing into a tree. She’s rescued by that lone rider – or Ranger, as she fleetingly recalls — a rugged rancher named Thomas Vance.

Judi just needed some time, to puzzle out the predicament she’d left behind in Illinois. But here she was in the arms of a doubting Thomas, a man with a strong jaw, deep-green eyes and a commanding presence. When Judi dodges his personal questions, not to mention his penetrating gaze, Thomas’ teenage half-sister Becky suggests amnesia as an explanation. Judi seizes on this foot in the Diamond V door, and stays on as a caretaker for Thomas’ beloved grandmother, who is recovering from hip surgery. Judi finds a family on the Diamond V, even as her masquerade as the home health aide Helga slowly unravels. But as she falls hard for her horse whisperer, she fears her secret will only cause him to bolt from her life. As for Thomas, he knows this impostor is lying, and it wouldn’t be the first time an outsider betrayed his family. Yet he can’t help but trust this sexy, independent, smart woman who has lassoed his heart.

Judi Monroe tilted her head back and looked above for the source of those quiet words.

Since she was in a church, and the words had echoed the niggling thoughts in her own head, it wasn’t an unreasonable suspicion. But if God was talking to her, He was doing it in a vaguely familiar female voice.

And He—or rather She—sounded frustrated.

So, who was talking in hushed tones somewhere off to her right in these final moments before Judi was to walk down the aisle to become Mrs. Sterling Carroll? With three exceptions, everyone should be in the main part of the church—sitting as a guest, standing as a member of the wedding party, or, in the case of her matron of honor and sister-in-law Bette, walking slowly down the aisle toward the altar.

The exceptions were herself, her father and the wedding planner, who was giving James Monroe final instructions.

Wedding planner? Wedding dictator was more like it. From the moment Judi had said yes to Sterling’s stunning proposal after a whirlwind courtship, she had felt as if she’d walked into a tornado, and Marjorie Ward—the best money could buy, as Sterling kept reminding her—was running the wind machine.

In fact, Judi strongly suspected that if she thought back she would find that this was the first time she’d been both awake and alone since that momentous “yes.”

The hushed voice came again. “If the bride isn’t involved, she could help us, and not warning her is letting her walk into one helluva post-honeymoon mess.”

Judi could no more have ignored those comments than she could have flown.

She eased over to the side of the vestibule where she’d spotted the barely-open door to the crying room, an area set aside for parents to retreat to during services with vociferous children.

“I know, I know,” said the voice. No one was in sight through the narrow opening, and Judi had to lean close to hear over the swelling music. If those trumpets would pipe down she could have heard a lot better. “That’s right. He’s got the shipment scheduled to arrive three weeks and two days after they return from their honeymoon. Which will be a little late for her if she doesn’t know what’s going on, since he’s got it all lined up to be in her name.”

There was a pause, then the voice sighed. When it spoke again it was resigned. “You’re right. We can’t risk it. Too much is at stake. Okay… Yes. … Yeah, right.” Sarcasm kicked in with those last two words. “I’m going to have a great time at this wedding. I just wish I knew if I’m about to watch Bonnie and Clyde getting hitched, or Mary Poppins being tied to Al Capone.”

Judi started to step back from the door. Her foot caught on the side hem of her dress, and she stumbled — pushing the door wide open.

Judi couldn’t remember the name of the woman who was rising from the chair set out of the view of the crying room’s soundproof window to the main church, but she recognized her. She was the brand new girlfriend of Sterling’s best man, Geoff.

They stared at each other, frozen in mutual horror.

Then Judi saw the other woman’s expression change. A flash of sympathy passed across her eyes, followed by determination. She strode forward in a tight skirt, the same style Geoff’s former girlfriend favored, and wrapped a hand around Judi’s upper arm.

“You can’t— You can’t say a word, do you understand? It’s vital. There’s a lot riding on this — more than you can imagine. A lot riding on it for you, too. If the deal gets blown now, nobody would ever believe you didn’t tell him. You’d be implicated up to your neck.”

“Implicated in what? I don’t—”

“Judith! What on earth!” The stage-whispered shout of Marjorie Ward was the only warning Judi had before her other arm was grabbed in an even stronger grip and she was propelled across the vestibule to where her father stood, a worried frown blooming across his face.

“Judi, is something wrong? Are you—?”

“No time! No time! Your music’s started!” Marjorie hissed.

She forcibly wrapped Judi’s numb right hand around her father’s arm, positioned her left arm at her waist, then curled the fingers of that hand around the base of the bouquet.

Vaguely aware her father was regarding her with growing alarm, Judi’s mind raced as she stood immobile through another two bars of music. Then two hands shoved her from behind, and her choices were to start walking fast or fall flat on her face. With her father hurrying to keep pace, the bride started down the aisle.

“Loyal readers know what to expect from a Patricia McLinn book — a strong, emotional story, a solid plot, and characters so real you miss them when the story ends. ‘The Runaway Bride’ is no exception.” — Shannon Stacey, 5-star Amazon review

McLinn “creates a fresh approach to the classic amnesia tale, giving ‘Runaway Bride’ an appealing twist. … [This] remarkable cast of characters will linger in the reader’s memory long after the last page is turned. Very highly recommended.” – 5-star review

“A fun quick read that’s filled with tenderness and passion. … Thomas Vance is sexy and heroic and Judi is lovely.” – Goodreads review

A Paperback Round Trip 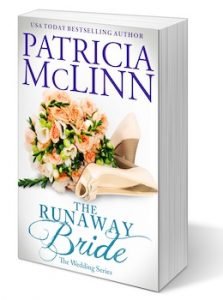 In late 2015, the original publisher of The Runaway Bride, which had been marketed as a mass-market paperback, reverted rights back to me. One of the original Wedding Series books, The Runaway Bride got an update, some text revisions and a fresh look. I reunited it with the rest of the series, where it fell smack in the middle (Book 4 of 7). This romantic comedy is having a successful run as an ebook, making Amazon's bestseller list. Now the story of Paul’s younger sister,,Judi, and Wyoming rancher Thomas is available in print again, as a larger trade paperback. I'm so thrilled to have this book back under my roof and to be able to bring it to you as part of The Wedding Series.