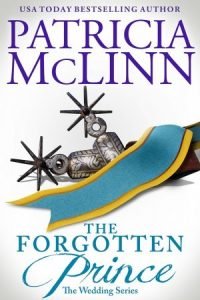 They Have a History — Can It Be Rewritten?

Prince Karl longs to once more be plain Karl Wethers, Wyoming rancher. Instead, his  sense of responsibility, nurtured as a cowboy and honed in the U.S. Army, won’t let him turn his back on King Jozef of Bariavak. But he has a plan. If he can pull it off.

Then international media consultant Harmon Reed re-enters his life. The Army brat who liked to juggle lit sticks of dynamite is now a woman who could explode that dynamite in his face. He’s fully occupied with trying to keep her from knowing anything about the complications of his royal life, because he will never trust her again, despite the pull of a love long gone.

For Harmon, what started as a youthful summer fling ignited into a love that shook her to her core. Equally smitten, Karl saw something beyond her beauty and rebellious streak. Then Harmon broke it off – and broke Karl’s heart. They went their separate ways, but no matter how far apart they traveled, the embers of first love remained. And the slim hope of a second chance floated in the periphery.

Oh, yes, these two have a history. A history neither has forgotten … but can they forgive?

Revisit other characters you’ve come to love in Prelude to a Wedding, Wedding Party, Grady’s Wedding, The Christmas Princess, The Surprise Princess and At the Heart’s Command (from the A Place Called Home series).

Not a Family Man, the story of Wyoming ranch foreman Tucker Gates and the attractive new owner of the Double Bar X, is the prequel to The Forgotten Prince.

Here’s an early exchange between former sweethearts Karl and Harmon:

“You’ve changed more than I have,” she said abruptly.

He chuckled. “Guess you don’t have to worry about fishing for any compliments about the years being good to you, not when you land your own the way you just did.”

She waved that off as unimportant. “You were a boy.”

“What way is that?” He braked to a stop at a traffic sign.

She waved that off, too. “But you were definitely a boy. A boy from the country with wide eyes and a wide-open heart.”

They looked at each for a moment. The memories and the defenses shifting and moving, but never quite aligning to allow passage from her to him or him to her.

She blinked away first. Only then did he say, “Maybe I was, but not a boy anymore.”

No. Definitely not a boy anymore.

5-Star Praise for The Forgotten Prince

“Against a complex background of politics and family relationships, Karl and Harmon fight against the love they once shared and the desire of each to help and protect the other. There is a little sex, but the book is not at all steamy. I very much enjoyed this story and felt that the author tied everything up in a most satisfactory manner. I highly recommend this to those who enjoy a romance with likable three-dimensional characters.”

“This book showed how people and countries have to change with the times if they are to survive. I loved the characters and the plot. Never sure if Karl was going to be the new king or not [or] how things went between Karl and Harmon. Read the book and find out!”

“The Forgotten Prince is a wonderfully complicated story bringing political intrigue, family dynamics, and unforgotten love into a whirlwind of raw emotion as the story moves toward its climax. Although part of a series, the author has skillfully made sure new readers won't be confused by all the characters and continuing readers won't get bogged down in repetition covering events they've already read about. While the story of King Jozef's search for a willing heir will keep readers engaged, the real beauty in this book is found in the many and varied relationships of the characters. Their hopes, their fears, their sacrifices, their loves, will so draw one into the story that when it is done you can't help but feel you really know these people. It is a fitting conclusion to a very fine series of books. I highly recommend them all."