A Town, A Book, A Family

When my contemporary romance novel A New World came out, my sister-in-law said, “Now I understand why you paid attention to all those details.” During various family reunions in Gloucester, Massachusetts, we’d walked on a lot of beaches, along town streets, through art colonies, all the while with me saying, “Look at that. Did you notice this? Isn’t that interesting?” And her mostly humoring me with “Uh-huhs.”

I’d been fully occupied in the writer’s never-ending pre-research: The noticing and gathering of details. The book is the story of realist Eleanor Thatcher and her romance with Cahill McCrea, an immigrant from Ireland who seems to her lost in dreams. Eleanor’s cousin, Valerie, matchmakes for them, then gets her own chance in the Wyoming Wildflowers series book, Jack’s Heart.

To avoid encroaching on anyone’s actual real estate in Gloucester, I created a beach for my book and set it between two real beaches. (Boy, if I could just create added beaches for real, think what a real estate mogul I’d be! 😉 ) But there was plenty of real Gloucester in A New World.

Although I grew up in Illinois, I knew Gloucester through family stories and visits, because it was my dad’s hometown, along with two generations before him.

I came across an article on the Nine Best Things to Do While Visiting Gloucester and was struck by how many have family connections for me:

Family stories are that, after immigrating from Ireland, one ancestor moved from Boston to Gloucester to help build an earlier breakwater than the one mentioned at the bottom, while another got a job at the anchor works – a necessity for the fishing fleet in America’s oldest seaport.

1.) The famous fisherman statue. My dad was taken to the unveiling of this statue by his father. He always said that when they pulled the covering off to unveil it that he was not at all impressed. What was the big deal? He saw men who looked like that all over town all the time. 😉

2.) Whale watching. My dad’s mother was adamant that none of her boys were going to go to sea. When we dug into her family, I understood why. She’d lost a grandfather, uncles, and cousins to the sea.

3.) Good Harbor Beach. The site of many family gatherings.

4.) Rocky Neck Art Gallery. I have several pieces of art from there. Gloucester has been home to artists for more than a century. But perhaps my most vivid memory was a trip when I was in sixth grade and we encountered my dad’s third-grade teacher, who remember him (and siblings) precisely … and just how naughty he’d been. What a goldmine! 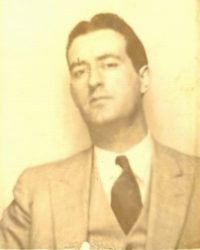 5.) Cape Pond Ice. It’s been around since 1848. I don’t know if it’s the same company, but my dad’s oldest brother worked as an iceman in breaks from college and law school. According to Dad, the women where he delivered always ordered extra, so he’d come back. 😉  That’s my iceman uncle on the right… in more formal attire.

6.) Feast on seafood. Lobster, of course. Dad said in his childhood lobster was considered a cheap food. They’d spread newspaper all over the kitchen table and the parents and seven kids would chow down on lobster. And the family tradition is to dip lobster not in drawn butter, but in apple cider vinegar. The great thing is it’s not as filling as the butter, so you can eat lots more vinegar!

7.) Hammond Castle. Dad remembered the owner. He wasn’t all that impressed with him, either. (He was a tough kid.) <wg>

8) and 9.) On this articles list are more recent and don’t have family connections for me, though we certainly explored marine life informally. Sometimes by accident. I vividly recall this Illinois kid accidentally swallowing salt water for the first time. It was a shock.

But I’d add another one that’s not on it — Dog Bar Breakwater. I remember walking it with Dad, as he explained how it protected the harbor. How ships previously would crash all too often against Dog Bar Reef.. And how Eastern Point Lighthouse helped, but not enough.

Each of these spots is a great place to visit even if you don’t have family connections. 😉 But if you go, spare a smile for these family memories!