I watched the movie The Post (Tom Hanks and Meryl Streep) with great interest recently.  Yup, I’m a Postie, having worked there for 23 years as an editor. I was full-time in Sports until several years after I started publishing books, when I went to part-time, working in various departments before settling in the News Service (how other newspapers get Post stories.)

Ben Bradlee interviewed me in his office during the hiring process.  Considering I’d gone several years at my first paper not correcting a fellow staffer who called me Cathy, it was a proud moment when I corrected Ben Bradlee when he goofed my name. How far I’d come. 😉  I wasn’t sure I wanted to take the Post job. He urged me to.

I never met Katherine Graham, but talked with Don Graham numerous times in his role as publisher (amazing ability to remember names and was delighted the Post “stole” me from the Charlotte (N.C,) Observer, part of Knight-Ridder. 🙂 )

I liked the movie a lot. Kept me engaged even though none of it was news to me (pun intended.) It did a good job of showing the stakes facing the paper … and the freedom of the press, with all it means, for the United States and the world. And the last scene was a great touch. (Not telling. You have to watch it.)

I recommend the movie if you want to know the history or relive the history.

Of course I was also watching the movie on another level — looking for things I remember about being at the Post.

Not much was the same. 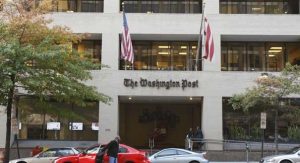 Not even the building entry. This is the entry I remember. You went to the left, walked past the presses on your right (eventually they were removed), then came to the elevators. Not sure if the entry depicted in The Post was accurate for 1971, then subsequently changed or if it was creative license by the moviemakers.

What was shown in The Post also was not the newsroom I knew — the layout, the typewriters, or, mostly, the people.  Though two newsroom legends — cartoonist Herblock and 41-year sports editor Shirley Povich — were presences both in the Pentagon Papers-era and when I started.   However, the consultants on the movie, spotted in the “Making of” feature were far more familiar. 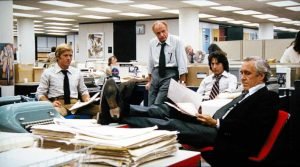 All the President’s Men did have the same physical newsroom as when I arrived at the Post … considerably more worn by then. <wg> And there were several re-dos while I was there. Though at least one of those orange chairs endured. … Far longer than it should have. 😉

All the President’s Men did a fantastic job of recreating that newsroom. Including Bradlee’s office, though the door moved to another of its glass walls, at right angles to where it was in The Post. Where All the President’s Men goofed was having people press the elevator button and having the elevator come immediately. Nope. Never happened. Ever. Even leaving at 2 and 3 a.m., always had to wait.

If you’re interested in newsroom nostalgia, this video was made just before the move and includes lots of folks I knew, including Martin Weil and Thomas Boswell — he’s telling the truth about those run-on shouting matches in the sports department involving Tony Kornheiser and Michael Wilbon. I edited many a story to that unmelodious soundtrack.

I was also in a number of those Waiting For The Pulitzer Announcement scrums at the Post. Though the one I remember best was at the Charlotte Observer, with the executive editor standing on the copy desk to share the news. Alas, the photo I have of that was lost in recent water in the basement. 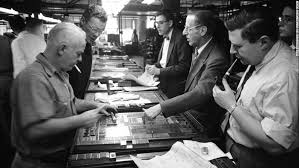 Back to The Post. The scenes with the production of the paper — hot type, Linotype, the printers, the presses — meant more to me than I would expect them to mean to most folks. My first paper was still hot type for a short time when I arrived there and I saw that process. Used to be in the composing room to check over pages one last time before they went to press by reading them upside down and backward. 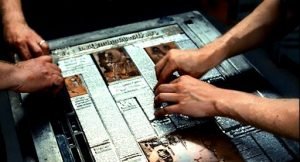 To my knowledge the parts of The Post where words show up in readable white were a concession to movie viewers. I sure never saw that.

The Post was cold type when I arrived there. Some of the presses were still in the Post building, then on 15th Street. They subsequently all moved to a suburban facility. But I remember many, many early morning hours leaving work, walking past the rumbling presses rolling … and thinking what a miracle it was that a newspaper had happened despite all the odds against it.

…And then, of course, being nearly run over by the delivery trucks. LOL.

So, watch The Post for the story and the history. Then if you’re interested in the nostalgia, come back and read this again.